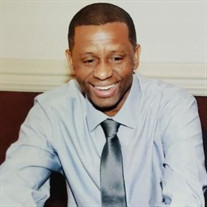 Wilton “Charlo” Asson age 61, passed away on October 17th, 2020 in Baltimore, MD. He was the husband of Newelling and father of Bryan. Wilton and Newelling were married for 32 years. Born in San Francique, Trinidad and Tobago, he was the son of Carlton and Evelyn Asson and the step son of Lawrence Jameson. From an early age, Wilton demonstrated an amazing quality of humility and compassion. He was the 7th of 9 children. He was obedient to his parents. He was a very stable child and was distinguished by his quiet and attentive nature. He had a particular love for children as he grew older. His nieces and nephews all admired and loved him. They affectionately called him “Uncle Charlo”. He would spend countless hours having fun and playing practical jokes on the kids. His fun loving nature infected everyone he came in contact with. Even children in the neighborhood have fond memories of his practical jokes. He greatly enjoyed English League Football, attending car shows and repairing cars. He grew to embrace the Ravens after adopting a love for American football. Wilton will always be remembered as someone who was always there for anyone who needed him. Wilton and Newelling first met in 1981 but started officially dating in 1982. They were married in 1988 in Baltimore, MD. Out of this marriage, they produced a son Bryan, who is a very successful young man. Wilton attended Siparia Anglican School. After which he attended a vocational school, completing a drafting certification. Following in the path of his older brother Dennis, he began his career as a firefighter at age 24. He spent 12 years at the Siparia Fire Station. He migrated to Baltimore, MD in 1995, where he transitioned to a new career as CDL truck driver. He worked for companies such as USF Redstar and Conway Freight now known as XPO Logistics. He remained an employee of XPO Logistics until October 17, 2020. On September 3rd, 2020 Wilton received an unfortunate diagnosis of cancer. During this time, he fought tremendously and maintained his true nature of caring for his wife and family. He consistently wore a brave face in an effort to protect us despite the pain and discomfort he felt. As he fought his battle, he used Psalm 23 as a source of strength and comfort, remaining fixed on God. Despite the diagnosis, he maintained a strong spirit of healing and was determined to share his testimony after his recovery. Even during our last visit, he remained resolute and fiercely stated, “I WILL NEVER GIVE UP”. On October 17, 2020, God called him home. As the news spread throughout the circle of family and friends in the US and Trinidad, there was such an outpouring of shock and grief. Tears flowed from everyone and everyone was of one accord in their sentiment that a truly great man had left us. Wilton will be long remembered as a soft, gentle, kind and loving human being. Each of us can take a page from his book of life and every day try to spread more love and care among each other. We know that our hope and prayer is that one day, we will see him again in eternity. WE LOVE YOU AND WE MISS YOU, WILTON! Preceding him in death are his parents Carlton, Evelyn, Lawrence, his sister Diane and nephew Kevin. Wilton leaves to cherish his loving memory: Newelling his wife, Bryan his son, his siblings Linda, Dennis, Desmond, Donald, Winston, Cheryl, Phillip, June and April. He is uncle to Marcus, Darryl, Dexter, Avanelle, Rigel, Osmond, Abbe, Amber, Dessary, Melissa, Melana, Mekana, Mekeele, Tricia, Aliston, Arissa, Shawna, Liselle and Michael. He is nephew to Dulcie and cousin of the Baptiste family. He is the friend of Peter, Juanita, Ayoni, Rawle and many many more. We would like to give special thanks to Liselle Richins whom Wilton loved and cherished as a daughter.

Wilton &#8220;Charlo&#8221; Asson age 61, passed away on October 17th, 2020 in Baltimore, MD. He was the husband of Newelling and father of Bryan. Wilton and Newelling were married for 32 years. Born in San Francique, Trinidad and Tobago, he... View Obituary & Service Information

The family of Mr. Wilton Asson, created this Life Tributes page to make it easy to share your memories.