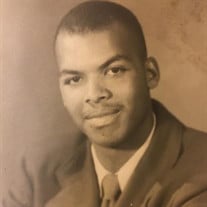 Dr. Wilson Robert Dickerson, Jr. passed away on October 10, 2020 after a short illness. He was the oldest of two children born to Wilson Robert and Clara Hearns Dickerson in Huntington, West Virginia on May 21, 1929. He was affectionately known as “W.R.” to friends and family; however, to his children and grandchildren he was called “Pappy”. Wilson moved to Baltimore at an early age and was raised by his aunt and uncle, Susie and Daniel Clark. He attended Booker T. Washington Middle School where he cultivated lasting friendships for over 76 years. He graduated from Douglas High School in June 1947 and enrolled in Morgan State College, now named Morgan State University. He left Morgan in his junior year to join the Army. On December 1, 1951 he married Kathryn Delores Brooks. To this union 3 daughters were born, Gwen, and twins Laurie and Lafon. Shortly after his marriage to Kathryn, Wilson left for the Korean War. He was a Gunnery Sergeant in the 23rd Infantry Regiment. In 1953, Wilson received an honorable discharge and returned home to his wife. Not long after his return, they moved to Washington, D.C. where he worked several jobs while attending Howard University. In 1956, Wilson obtained his Bachelor of Science degree in Zoology with a Physics major. On a path that would become his career, Wilson enrolled in Howard University School of Dentistry. The next five years were busy with school, studying and work. He received his license to practice dentistry on June 25, 1961 and began working with Dr. Lester Young before opening his own practice. Dr. Wilson Robert Dickerson, Jr. DDS Dentistry was an integral part of the community in which it resided. He committed years of dedicated dental service to the Berea Community. After 52 years, he was recognized in 2013 with a City Citation for outstanding service to the community. He also received the Governor’s Citation from Governor Martin O’Malley. Dr. Wilson’s outreach to the community also included volunteering his dental services for many years to the Division Street “Healthy Smiles” program. Dr. Wilson had a strong work ethic and stressed the importance of an education. He loved sharing life lessons and often provided words of wisdom. One of his sayings to his children was,” Use your head for more than a hat rack”. He had a zest for life. He loved hunting deer and fishing. He would say the water and the roar of the engine gave him peace. Traveling brought him great joy. Bermuda and Hawaii were his favorite places to go. If there was a concert with Dionne Warwick, Sweet Honey in the Rock or Glady’s Knight, he was surely there. He cherished the friendships he had with family and friends. If you were a friend, you were supported, encouraged, and celebrated just like you were family. Family was everything to him. This was evident with the relationship that he had with Dmitri, his first grandchild, who he thought of as a son. He also shared a special bond with his daughter, Kimberly Koonce. His marriage to Kathryn ended in 1976 but they remained good friends. She preceded him in death (1/12/2014). Dr. Wilson will be truly missed by his children Gwenith Dickerson, Laurie Dickerson, Lafon Dickerson and Kimberly Koonce; his grandchildren Dmitri Dickerson (Krysti), Marquise Blake-Spencer(Brittany), Adrian Dickerson, Troy Dickerson, Andre’ Dickerson, Kathryn Dickerson and Aaron Dickerson; great-grandchildren Jalen Dickerson and Calista Dickerson; sister Frances Huggard (James). He is also survived by a host of nieces and nephews.

Dr. Wilson Robert Dickerson, Jr. passed away on October 10, 2020 after a short illness. He was the oldest of two children born to Wilson Robert and Clara Hearns Dickerson in Huntington, West Virginia on May 21, 1929. He was affectionately... View Obituary & Service Information

The family of Dr. Wilson Robert Dickerson Jr. created this Life Tributes page to make it easy to share your memories.