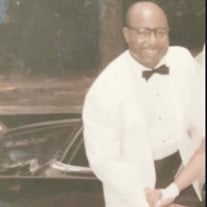 Willie Roe Alexander, son of the late Monroe Mason & Margaret Davis was born on November 15, 1923 in Clay County, Georgia he peacefully went to be with the Lord on Saturday October 31, 2020 at his home in Baltimore, Maryland Willie Roe was adopted by his stepfather John Ike Alexander and raised in Fort Gaines Georgia. Willie Roe was the youngest of his two siblings, Arthur & Willie Mun. Willie Roe received his formal education in Clay County along with his siblings. In the late 1930’s Willie Roe enlisted in the United States Navy and served in the World War II, after he was discharged from the navy he returned home to Fort Gaines, Georgia, soon after he was blessed with his first born son Willie Earl Mason born on June 19, 1948. In the 1950’s Willie Roe met the love of his life Mollie Lee Davis and was united in holy matrimony & to this union was his second son Stephen Terry Alexander born on September 28, 1958. Willie Roe and Mollie resided in Baltimore, Md where they raised their three children Gloria and Shirley. He has held various jobs, Steel worker at the Steel Mill, also at Montgomery County schools as a HVAC technician and he was employed at City Temple for many years until he retired. Willie Roe was the hierarchy of his family and loved to laugh and tell you stories of his childhood history of the days before time. He had a love for his family and friends that was unmatched. Willie Roe enjoyed being “Grandpop” and spending as much time as he could with his grandchildren, whom he absolutely adored! He was proceeded in death by his wife Mollie Lee Alexander, father Monroe Mason, his mother Margaret Alexander & stepfather John Ike Alexander, as well as his two brothers Arthur & Willie Mun Alexander. Willie Roe will truly be missed by his two sons Willie Earl and Stephen His grandchildren Terrell, Jerry, Sheri, Unique, Teniera, Shanicka, Barraze, Antoine, Aaron, Sheronda, Monique, Latishia, Tekelya, Willie Earl II and a host of great grands nieces and nephews

Willie Roe Alexander, son of the late Monroe Mason & Margaret Davis was born on November 15, 1923 in Clay County, Georgia he peacefully went to be with the Lord on Saturday October 31, 2020 at his home in Baltimore, Maryland Willie Roe was adopted... View Obituary & Service Information

The family of Mr. Willie Roe Alexander created this Life Tributes page to make it easy to share your memories.