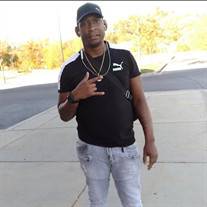 William L. Wright, son of Rositta Emanuel and the late Timothy Snipes Sr. was born on March 15, 1984 in Baltimore, MD. He departed this life on September 3, 2021. William, affectionately known as "Lil Tiny", was a natural born leader, who practice Islam as his religion. He received his education from the Baltimore City and County Public School System. Lil Tiny worked for S & G environmental service under the guides of his father. Lil Tiny had a major love for music. One of his favorite pastimes was writing songs and rapping them. When he was younger him and his cousin Joey started a rap group called Black Label. He also listen to different genres of music especially Hip Hop. Lil Tiny also loved to spend time with his family and friends. Everyone treated him like family, and he treated everyone like family. He loved to laugh, joke and have fun with his family especially his siblings. Unfortunately, he never had kids, but his nieces and nephews made up for it. They were truly his heart. Lil Tiny was truly a good guy despite his demons that he faced. He always had everyone back even when he was at his lowest. William preceded in death by his father Timothy Snipes Sr. and aunt Libby Fluitt. He leaves to cherish his memories; his mother Rositta Emanuel; grandparents Carole Dent, Francena Smith and Rufus Metts; three aunts Carole Tilghman, Khalilah Metts and Patricia Smith; three uncles Fredrick Lomax, Charles Emanuel and Rufus Metts Jr; four sisters Ciera Anderson, Crystal Snipes, Briann’a Brance and Tashona Snipes; four brothers Timothy Snipes Jr, Terrell Johnson Sr, Tavon Snipes and Norman Carter; six nieces Taylor, August, Aleja, Tameira, Kenzie and Charlie; four nephews Jamari, Akellease, Tristian and Terrell Jr.; four favorite cousins Latoya, Eliah, Joseph and Diontay; and a host of beloved family and friends.

William L. Wright, son of Rositta Emanuel and the late Timothy Snipes Sr. was born on March 15, 1984 in Baltimore, MD. He departed this life on September 3, 2021. William, affectionately known as "Lil Tiny", was a natural born... View Obituary & Service Information

The family of Mr. William Leonard Wright created this Life Tributes page to make it easy to share your memories.