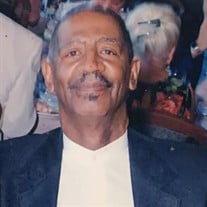 William Stanley Matthews, Sr. of Baltimore, MD transitioned from this life and was welcomed to his heavenly home on December 18, 2020. William was born April 30, 1936 to the late Norman and Grace Matthews; the 10th of 13 children born to this union. William received his formal education from the Baltimore City Public School System, a graduate of Carver Vocational-Technical High School. On July 16, 1955, William entered into holy matrimony with his high school sweetheart, the late Marian Hopkins, who he had known since his early childhood years. From this union they were blessed with two children: William, Jr. who preceded him in death, and Monyette. This union was bonded for nearly 60 years before the Lord called Marian home on July 14, 2015. It was early in life when William accepted Jesus Christ as his lord and savior. During his childhood he worshipped under his grandfather, the late Rev. William A. Matthews, at Saint Marks United Methodist Church in Hanover, MD. Later his family moved to Baltimore, MD where he became a faithful member of Jones Tabernacle Baptist Church (The Tabernacle of the Lord Church and Ministries) for over 60 years. Under this ministry and the leadership of the late Rev Arthur D. Jones William experienced growth in Christ. It was under the late Rev. Dr. Arthur E. Jones that he became an ordained deacon in September of 1966. As a deacon for 54 years William served faithfully as a prayer warrior, visiting and communing the sick and shut in every weekend. During his service he witnessed the transition from the tent to the tabernacle and 3 generations of pastoral leadership. In addition to serving as a member of the deacon board, William served as a Church Treasurer, Member of the Board of Christian Education, Male Chorus, and a faithful bus driver to many conventions, conferences and retreats across the country. William lived a life of service in and out of the church, serving local boy scouts as scoutmaster and founder of Troop #578. During this time, he provided a loving and stern mentorship while providing young leaders with the tools and skills to be successful. William was a strong, protective, kind and giving, devoted man of God who had a strong love for his wife, family, and the Dallas Cowboys. He also loved to go camping and fishing with his family and friends. William was a dedicated employee for Baltimore County Public Schools performing boiler maintenance where he retired as the Chief Engineer. After retirement, he began working as a school bus driver for Baltimore City Public Schools where he would go on to retire from as well. William was devoted to the betterment of his community through the Easterwood neighborhood association where he served as President. Through his outstanding dedication to the community he received numerous citations and awards. William leaves to cherish his memory: one daughter: Monyette Johnson (Frank); one Sister: Delores “Jo Brown” Merritt (Tyrone); six grandchildren: William III (Denise), Sarrina, Marques, Frank III, Larry Jr., Tavon; fourteen great-grandchildren: Denesha, Priscilla, Destinee, William IV, Daekwon, Jamaahl Jr., Jamel, Darnell, India, Marques Jr., Deshae, Morgan, Khalen, Isaiah; two great great-grandchildren: McKenzie, Payton; two Brothers-in-law: Roland “Joe” and Melvin Hopkins; one Sister-In-Law: Camelia Henson (Leroy); a special nephew: Ernest “Tank” Tomblin; three lifelong friends: Deacon Roosevelt Walker, Deacon Prince Young, and Roland Mills; and a host of other nieces, nephews, relatives and friends.

William Stanley Matthews, Sr. of Baltimore, MD transitioned from this life and was welcomed to his heavenly home on December 18, 2020. William was born April 30, 1936 to the late Norman and Grace Matthews; the 10th of 13 children born... View Obituary & Service Information

The family of Mr. William Stanley Matthews created this Life Tributes page to make it easy to share your memories.