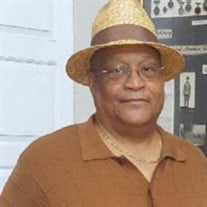 William H. Bailey, son of the late Mae and Vernon Bailey Sr. was born August 15, 1948 in Baltimore, MD. He departed this earth on November 12, 2020. William, known to everyone as Billy or Uncle Bill, was educated in both the Baltimore City Catholic and Public Schools. He graduated from Carver High School and attended Catonsville Community College where he received an Associate’s degree in Accounting. Uncle Bill was a Sergeant in the Marines from 1966 to 1970 and the Army from 1981 to 1984. He earned many honors to include: National Defense Serve Medal, Presidential Unit Citation w/ Star, Vietnam Service Medal w/2 stars, Republic of Vietnam Campaign Medal w/ device, Combat Action Ribbon, Overseas Service Ribbon, Army Service Ribbon, Army Achievement Medal, and NCO Professional Development Ribbon. While serving, he resided for a brief time in Alaska which he enjoyed talking about and one day wished to return. After leaving the Army with an Honorable Discharge, Uncle Bill was employed at different companies within Baltimore City. In the late 1980s, he started his career with Bethlehem Steel as a Crane Operator where he remained until his retirement. During his life, he attended many parties and relaxed daily after work at Lexington Market. He enjoyed the old Star Trek series, music, westerns, and had an undeniable love for Chaka Khan. After retirement, Uncle Bill always stated that he was content with staying home, watching tv, and enjoying Grand Marnier and Moonshine. As a companion after the loss of his sister Sandra, he found healing with the comfort of his puppy-child Face. He was proceeded in death by parents Mae and Vernon; brothers Vernon Jr (Barbara) and Bruce; sisters Constance and Sandra; nephews Chris and Gerald “J-Roc”; and niece Denise. He leaves to cherish precious memories: his sisters Theresa and Yvonne; brother Norman; nephews Michael, Kittrel, Vernon III, Ronald (Nicole), Jeffrey, and Tyrone (Danielle); nieces Janette, Monica, Rana, Nina (Dwayne), Angela, Oprah (Ammanuel), Tia (Keith), and Gierra; a host of cousins, great- and great great- nieces and nephews and friends; his favorite daily visitors great-niece Shawanda, great-nephew Blake, and great-great-niece Alice, and his favorite dog Face. He will be truly missed by all that know and love him.

William H. Bailey, son of the late Mae and Vernon Bailey Sr. was born August 15, 1948 in Baltimore, MD. He departed this earth on November 12, 2020. William, known to everyone as Billy or Uncle Bill, was educated in both the Baltimore City... View Obituary & Service Information

The family of Mr. William Henry Bailey created this Life Tributes page to make it easy to share your memories.