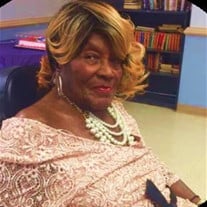 Virginia Venie Cockrell Taylor made her first cry in the world on February 4, 1921 in a small county called Northumberland VA. She was born to Lenard Taylor and Evelyn Cockrell and some years later raised by her aunt and uncle, Alice & Wilma Cockrell. Virginia had many nicknames over her lifetime, among them; Momma, Venie, Grandma, Auntie and the one that made her melt was Diva. Her family moved to Baltimore MD in the late 1920’s early 1930’s. Virginia gave her heart to Christ in her childhood years. After her move to Baltimore, Virginia met and married at a very young age, the late Floyd Taylor in 1935. They eventually sought out a life together and moved to New York City. Virginia recently came back to her hometown of Baltimore in the early 1980’s to care for her big brother who had cancer. Sometime thereafter, she joined St Abraham Baptist Church on North Ave under the leadership of Rev. Clarence Yerby and 1st Lady Deloris Yerby where she became the mother of the church and she was on the Golden Girls ministry. Virginia Taylor loved to travel national and internationally. She visited places such as California, Alaska, Mexico, and Saint Martin. She had a welcoming spirit and made plenty of friends wherever she went. Virginia was known for her glamour dressing, fancy hats, great personality and being an excellent cook. Virginia lost both of her legs which caused her to need full time care at Future Care Lochearn Nursing Home where they took excellent care of her. She participated in games, went on shopping sprees such as Roses, participated in fashion shows, they also took her to the beauty salon and nail shop. She was well respected and even picked up the nickname The Diva. Virginia was well known for her community and missionary work. Prior to getting ill she cooked and served meals for different events and she feed many people in need. She held a position as president for the tenant’s association at Johnson Square Apartments, she served as the front desk security. She was a board member for the Catholic Charity and in her early years she worked with Rev. Al Sharpton to register people of color to vote and she participated in sit in’s. She did not know him very well, but she remembers the words he spoke to her, “Never let anyone speak to you to make you hold your head down”. Virginia lived to be 99 years old just shy of her 100th birthday. She was the last of all her siblings to have lived life. Although Virginia didn’t have any birth kids, she shared a wonderful bond with Samantha Bennett who she considered as her daughter. Virginia leaves a legacy of love to a host of nieces and nephews, great-nieces and nephews and great-great nieces and nephews, as well as 2nd and 3rd cousins. Close friends; Micki Eley of 62 years, Wilma Moore of 40 years, Tyrone McClain, and Donnie Del-Rio her friend and power of attorney.

Virginia Venie Cockrell Taylor made her first cry in the world on February 4, 1921 in a small county called Northumberland VA. She was born to Lenard Taylor and Evelyn Cockrell and some years later raised by her aunt and uncle, Alice & Wilma... View Obituary & Service Information

The family of Mrs. Virginia V. Taylor created this Life Tributes page to make it easy to share your memories.

Virginia Venie Cockrell Taylor made her first cry in the world...