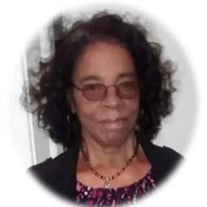 Veronica “Ronnie” Yvonne Hardy, daughter of the late Shirley Laverne Thompson and John Quincy Hardy was called home to be with her Lord and Savior on January 20, 2022. Born December 1, 1954 in Baltimore, Maryland, Veronica was raised in a Christian home by her grandparents, Rev. Elijah and Cora Shaw and her great grandmother, Bessie Shaw. Veronica received her formal education from Carver High School. Veronica accepted Jesus Christ as her Lord and Savior as a young girl at Mount Hebron Baptist Church in Baltimore, MD under the leadership of Rev. James Matthews. She has been a long-time disciple of the Ebenezer Baptist Church in Baltimore, MD; she actively supported and faithfully went to church until the church closed due to the corona virus pandemic. Veronica loved going to church and especially attending Sunday School. She loved when her Sunday School Teacher, Connie Ross, called on her to teach Sunday School. She took her task seriously and solicited help from her daughter to get the task done. Ronnie enjoyed reading the Word daily and applying it to her life. She had several prayer partners, one being her daughter. She was always ready to pray and even prayed her last public prayer for those present to hear on Sunday, January 16th. Veronica (affectionately called Aunt Ronnie) loved people and helped in any way that she could. She enjoyed spending time with family and friends, and she loved going on family trips. Ronnie loved her children and grandchildren. She was instrumental in every one of their lives and they all held a special bond with her. Family was very important to her and we all knew it. Even friends were family because that’s just the kind of person she was. Ronnie loved laughing, cracking jokes, talking, music, dancing, singing, watching movies, riding roller coasters, cruising, drinking Pepsi, going to the casino, and just having a good ole time. Veronica was preceded in death by her son, Reginald Elijah Stackhouse. She leaves to cherish her memories, two children: Howard Damon Smith, Sr. and Cameira Veronica Taylor (Eric, Sr.); ten grandchildren: Eric Taylor, Jr. (Ashley), Howard Smith, Jr., Cherontae Vasquez (Johnathon), Shalik Smith, Charis Taylor, Shyesha Caldwell (Andros), Nakya Smith, Erica Taylor, Annaysha Smith, Dashawn Stackhouse, and Eli Taylor; three great-grandchildren: London Smith, Aaliyah Smith, and Noah Smith, three sisters: Vernetta Thompson, Victoria McDaniels (Bernard), Shunice Woods, two brothers: William Thompson, Jr. and Bernard Thompson (Jill); her aunt: Jennifer Shaw-Wynn (Bernard), and a host of relatives and friends who were all near, dear, and special to her. Special thanks to Lisa Graham and Angernette Floyd for taking special care of our mom.

The family of Ms. Veronica Yvonne Hardy created this Life Tributes page to make it easy to share your memories.