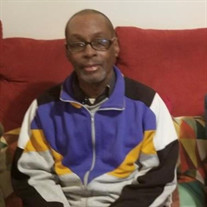 Van Jefferson, Sr. was born to the late Wesley Sr. and Mildred Jefferson on June 3, 1953, and after a short battle with cancer took his rest on February 8th, 2022.  Van grew up in Baltimore and was educated in Baltimore City Public Schools. In his big brother’s footsteps, he graduated from City College in 1971, and later became a member of Beta Omega Epsilon (BQE) Fraternity. Some years after high school, he decided to serve his country in the United States Army in the infantry division. Upon completion of his military service, he became a jack of all trades working in numerous jobs. To know him was to love him. It sounds so cliché but that's how it was with Van. Genuinely that's who he was. If you met him, you had no choice but to like him. His personality was so warm and inviting that being around him was always a pleasure. He always had a funny story to tell about some wild unbelievable event that took place, some crazy party he had been to, or some ridiculous fight he had been in. The stories he told about growing up with his big sister and brother would surely bring a smile to your face. If he was at a party you could count on him being the life of the party, dancing and singing until he couldn’t dance anymore. If he was nothing else, he was the life of the party. He was the fun uncle that everyone wanted to hang out with then go home and talk about the fun times with Uncle Van. He loved martial arts, wrestling, and took full advantage of any opportunity to show his skills and brag about how he won a fight. He was a funny outgoing guy with a big heart. He genuinely loved his family and friends. To cherish his memory, he leaves behind his wife Miriam; brother and sister, Wesley Jr. and Jacqueline; three children, Santia, Yolanda, and Van Jr.; six grandchildren, Da’shawn, Mickayla, Austin, Evan, Lena, and Vernon and a host of other family and friends.

Van Jefferson, Sr. was born to the late Wesley Sr. and Mildred Jefferson on June 3, 1953, and after a short battle with cancer took his rest on February 8th, 2022.  Van grew up in Baltimore and was educated in Baltimore City Public Schools.... View Obituary & Service Information

The family of Mr. Van William Jefferson, Sr. created this Life Tributes page to make it easy to share your memories.

Van Jefferson, Sr. was born to the late Wesley Sr. and Mildred...