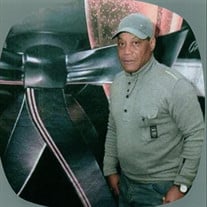 Tony McIntosh Sr., the son of the late Willis and Ethel McIntosh, was born on March 8, 1957 in Baltimore, Maryland. He departed this life suddenly on November 24, 2020. Tony aka “Pipe” by family and friends. He was educated in the Baltimore City Public School System. He grew up on the 2700 block of Tivoly (2760), Zone 18. Pipe enjoyed singing with his brothers, and THEY CAN SING. Early on they all were a part of singing groups (Frankie & The Circulations, Rickey & The Constellations, and Tony & Gregory were the Magic Stone….STOP LOOK LISTEN). Back in the day you would always be able to see one of the groups singing. He and his brothers were known for the voices that all girls wanted to hear on any Friday & Saturday. Tony grew up in a close KNIT family and had a special relationship with his Mother, brothers, and children. He enjoyed baseball and basketball. In later years, he became an avid watcher of football. Pipe had various jobs throughout his life, and retired after 13 years of employment of Baltimore City Public Works. After years of addiction, Pipe changed his life in 1993 with guidance and support of Calvin Moore Silvers (sponsor). He developed a relationship with the Lord, and began attending church at the (CRL), Church of the Redeem of the Lord. Since his recovery, Pipe continued to be a trusted sponsor until his untimely passing. Pipe, had been dedicated to mentoring others through Narcotics Anonymous, and he continued to guide others through their recovery journeys. Pipe enjoyed spending time with friends, family, and extended family who he developed a close bond, and treated as bonus children Courtni, Cymone, Ciara and Nigera. Pipe was always the life of the party. Everyone knew to expect him to arrive at any event in his signature look; a fitted hat and toothpick placed gently in the side of his mouth. He was consistently present at milestone family events such as birthdays, graduations and proms. Pipe loved interacting and playing with his grandchildren, however, the knew when “Pop Pop” had gotten serious and playtime was over. Pipe was preceded in death by his brother Robert Earl McIntosh Sr. and nephew Robert Earl McIntosh Jr. He leaves to cherish his memory; his mother Ethel McIntosh; four children, Shante Massenburg, Sharron McIntosh, Tony McIntosh Jr., and Shadashua Malone; six grandsons, Quintez, Quartez, Tyreece Jr., Antonyo, Quan and Dominick; four granddaughters, Tanaya, Malia, Aubrey, and Dior; one great-grandson Qu’mari, one great-grandson Qu’mari, one great-granddaughter Amani; six brothers, Willie, Rickey Sr., Gregory, Christopher, Willis, and Eric McIntosh; one sister, Deborah Arthur; one brother-in-law Reginald Arthur; two sisters-in-law, Wanda and Terrell McIntosh; one aunt Henrietta Biggsby of Anderson, South Carolina; and a host of nieces, nephews, family and friends.

Tony McIntosh Sr., the son of the late Willis and Ethel McIntosh, was born on March 8, 1957 in Baltimore, Maryland. He departed this life suddenly on November 24, 2020. Tony aka &#8220;Pipe&#8221; by family and friends. He was educated in... View Obituary & Service Information

The family of Mr. Tony McIntosh, Sr. created this Life Tributes page to make it easy to share your memories.

Tony McIntosh Sr., the son of the late Willis and Ethel McIntosh,...