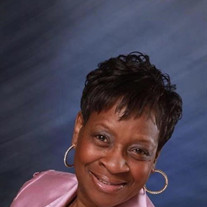 Elder Theresa Lewis, daughter of Alice Mae Goodson, and the late Robert Lark Goodson was born on September 4, 1956. On the evening of Wednesday, July 15, 2020. in the comfort of her home, surrounded by her children, sister and eldest granddaughter, Theresa peacefully went on to her eternal rest. In her early years, Theresa was raised in Washington Temple Church of God in Christ, under the late Bishop F.D. Washington, in Brooklyn, New York.. At age 5, she began singing along with the children’s youth choir, Celestial Echoes. She was a member of the junior usher board, and in her teen years, a member of the Celestial Choir. Theresa received her education in Brooklyn, New York at P.S. 316, I.S. 320, then on to Prospect Heights High School, where she received her high school diploma. Theresa went on to the College of New Rochelle in Brooklyn, New York where she earned her bachelor's degree in Social Work. In 1998, she became a LSW, a licensed social worker in the state of New York. She continued her work throughout the State of Maryland working for the Department of Social Services and later on to Harford Family House. Theresa was currently working for Win Family Services as an independent contractor under her own non-profit; a 'House of Healing' a ministry of healing that afforded her the opportunity to do what she loves as her own CEO. Theresa loved to work, and dedicated her life to whatever was put on her plate. She loved people and was faithful to any task put before her. She would treat any one that she met as though they were family and did no wrong. Theresa was the wife of the late Waverly “Tony” Lewis, and from this union they raised four children, Tiffany, Menden, Corey, and Porcia. Theresa loved her children. She enjoyed life to the fullest by traveling with family and friends, roller-skating, eating at White Castle and enjoying her vanilla milkshakes from Sonic. She enjoyed spending time traveling to and from New York to visit with her family and friends but most importantly her five grandchildren whom she was so proud of. Most importantly, she loved her cereal. Elder Theresa Lewis relocated to Aberdeen, Maryland in October 2001. She later became a member of Word of Faith Outreach Ministry, under the leadership of Bishop Melvin T. Taylor and Evangelist Carol V. Taylor in 2002. During her time at Word of Faith, Elder Theresa rededicated her life back to the Lord. Elder Theresa received her Ministerial License through the Pentecostal Assemblies of the World in 2006. In 2013 she became an Elder at Word of International Outreach Ministry, Inc. In 2017, Elder Theresa Lewis received her Associate of Arts degree in Biblical Studies. Elder Theresa Lewis was a Prophetic General and anointed Prayer Warrior. She was faithful in whatever her hands found to do and was a constant support to ministries and their leaders from all over. During her time at Word of Faith, Elder Theresa was a Co-Leader of Cell Group #2, and the Women’s Ministry. She was a faithful Trustee within Word of Faith and an Usher Board member. She loved being a part of the choir and dance ministry. Elder Theresa along with Evangelist Judy Frierson, ministered faithfully to the women at the Harford County Detention Center. She was also one of the first to travel to Haiti with the Word of Faith Missionary Team in 2006. Elder Theresa was also a published author in “He Still Speaks…” After years of participating as a prayer warrior on numerous other prayer lines, 'Prophets at the Gate' as well as others. She gave birth to The Midnight Cry Prayer Line which began towards the end of 2016. Elder Theresa’s call to be a prayer warrior was exceptional and unique. In 1 Thessalonians 5:16-18...”Pray without ceasing,” were truly words Elder Theresa lived by. She would pray without hesitation. for anyone; old to her, new to her, dear to her, far from her. In the line at Kohl’s, and in the parking lot of Walmart, wherever you needed it, she would lay it on you. If anyone needed to get a prayer through, they would call on Elder Theresa Lewis. After the passing of her two sons, Elder Theresa was an active member of MOMS, Mothers of Murdered Sons were she was a blessing to many with her story of love, perseverance and forgiveness. Elder Theresa Lewis leaves to cherish her memory, her mother, Alice Mae Goodson, Brooklyn, NY; 2 daughters, Tiffany Goodson, and Porcia, Brooklyn, NY; 5 grandchildren, Cinaya, Cimarah, Cashaura, Kyrah, and Chance, Brooklyn, NY; 5 siblings, sister Shirley Staten, Anchorage, AK, brother Aaron Springer (Belinda), Los Angeles, CA, brother Robert Goodson (Linda), Harlem, NY, Greshwin Pierre (Leo), Brooklyn, NY, and Renita Goodson, Aberdeen, MD; 5 honorary sisters, Angela Harris (Robert), Aberdeen, MD, Brenda Thompson, Liberty, NY, Carol Taylor (Melvin), Aberdeen, MD, Monique Kitchings, Brooklyn, NY, Rochelle Sanders, Brooklyn, NY; Honorary son, Duvowel Peaker (Angela); and a host of cousins, nieces, nephews, friends, and church family. Elder Theresa Lewis was preceded in death by her husband, Waverly Tony Lewis; her father, Robert Lark Goodson; and her two sons, Randolph Mendon Goodson, and Waverly Corey Lewis.

Elder Theresa Lewis, daughter of Alice Mae Goodson, and the late Robert Lark Goodson was born on September 4, 1956. On the evening of Wednesday, July 15, 2020. in the comfort of her home, surrounded by her children, sister and eldest granddaughter,... View Obituary & Service Information

The family of Mrs. Theresa Lewis created this Life Tributes page to make it easy to share your memories.