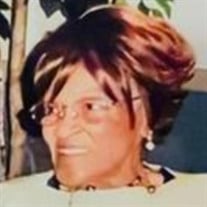 Thelma Lee Kee, daughter of the late, Floyd and Clarine Barnes was born March 3. 1925 in Portsmouth, Virginia. She peacefully transitioned on Monday, November 22, 2021, while vacationing in Youngsville, North Carolina. Thelma received her formal education in the Portsmouth Public School System, graduating from I.C. Norcom High School. Upon graduating from high school, she married the love of her life, Claude Richard Kee, Sr. on July 4. 1945, and traveled with him while he served in the U.S. Navy. Upon his discharge from the Navy, they settled in Baltimore, Maryland. There they started their family which consisted of seven children. Thelma worked a variety of jobs before she started working at the Rosewood State Hospital. She loved the job and enjoyed working with the disadvantaged children. She was employed there until her retirement. Thelma received Jesus Christ as her personal savior while attending the Third Baptist Church in Portsmouth. She loved dressing up and dress up she could, and going to Sunday worship. Upon moving to Baltimore, she joined a few churches but finally settled on Liberty Grace Baptist Church. After attending Liberty Grace for a number of years she moved her residence and joined a church closer to her home. That church was Pleasant Hope Baptist Church under the late, Pastor Samuel Blow and then the present pastor, Rev. Dr. Heber M. Brown III. She attended Pleasant Hope Baptist until her health started to decline and she could no longer drive. Thelma was a very feisty lady but was also a very private person. She could tell you about anybody else but she wouldn't tell you about her. She loved to dress. She always kept a very fashionable wardrobe; hats and shoes to match every outfit. She enjoyed watching old television shows, working crossword puzzles and did she ever love getting her lottery scratch off tickets. God blessed Thelma in so many wonderful ways. She was a two-time cancer survivor. At the time of her passing she had no illnesses, took no medications and her passing was ruled natural causes. After all she was 96 years of age. She loved visiting her daughter, Carolyn and her husband who reside in North Carolina. During her last visit there she enjoyed beautiful peaceful days on the screened in back porch, visits to Smithfield's BBQ, and scenic rides through the beautiful countryside. She was only there for a few days before Jesus called her home, but she was where she was happiest. She will be sorely missed. She was preceded in death by her husband, Claude Richard Kee, Sr.; four siblings, Floyd Barnes Jr., Roosevelt Barnes, Doretha Pimento and Bernice Tucker; and three grandchildren, Dwayne W. Kee, Keely R. Green and Ronald R. Jackson. Thelma leaves to cherish her memory: seven children, Claudia Kee, Celestine Bess (Stanley), Vernice Kee-Davis (Larry), Carolyn Royster, (Lee) Claude R. Kee, Jr. (Earlene) Adrianne Wallace, and Valarie Scofield (Samuel); 18 Grandchildren; 49 great-grandchildren; and 18 great-great grandchildren.

The family of Mrs. Thelma Lee Kee created this Life Tributes page to make it easy to share your memories.