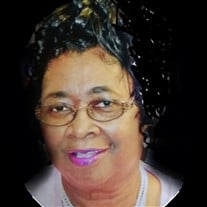 On Wednesday, October 27, 2021, Thelma Marie Herring received the call to eternal reward, transitioning peacefully to the will of God. She is now resting in her new home with the Lord. Thelma, (affectionately called “Rea”) was born on May 15,1937 in Turkey, NC to the late, James S. Stevens and Macie Morrisey Stevens. She was the seventh child of eleven siblings. She was preceded in death by her husband and childhood sweetheart, Ernest Herring, her son, Joe Dan “Milford” Herring and his twin sister, Patricia Herring Peay, her parents, and 5 siblings. Thelma received her education in the Sampson County School system, where she often bragged about dominating the basketball courts in the 1950’s. She grew up in a home where praising God through singing was nurtured by her mom, Macie Stevens. She joined Greater Six Runs Missionary Baptist Church, Turkey, NC at an early age where she used her vocal talent to sing in the church choir. She graduated from high school and joined in holy matrimony to Ernest Herring and was blessed with three children, twins Joe Dan “Milford” and Patricia and Mary “Baby Lou” Herring. After relocating to Baltimore, MD she worked at Greater Baltimore Medical Center for 39 years and retired there. She joined The Christian Community Church in 1973, under the leadership of Elder Conway Green. While there she served faithfully for 40 + years on the Radio Choir as one of the lead vocalists. She sang with the Green Specials and became Vice-President of the group. She served as Assistant Chairman of the Women’s Day. She later joined Bibleway Community Church of God, where she was a member for over 11 years under the leadership of Pastor Willie B. Tripp. She served faithfully in the capacity of president of the choir and also served on the Missionary Board until the Lord called her home. Thelma looked forward throughout her years away from home to returning home several times a year to visit her family. Mother Macie always made sure that the family got together to sing, sing, sing to the glory of God and on many occasions breaking out in praise and worship. Thelma loved listening to her brothers, the Jerusalem Travelers sing and would look forward to coming home to attend their anniversaries. Thelma was a loving mother, grandmother, sister, auntie and friend to many. People always gathered to the family home when she visited to be in her presence. She was always so jovial and kept the family laughing. She was so loved and will be sorely missed. We find great comfort in 2 Corinthians 5:8 “We are confident, I say, and willing rather to be absent from the body, and to be present with the Lord.” She leaves to cherish her memories her devoted daughter, Mary (Chuck) Eubanks of the home, grandson (she raised), Joe “Joe Joe” Herring, son-in-law, Reginald “Pee Wee” Peay, 5 grandchildren, two preceded her in death, 15 great-grandchildren, 15 great-greatgrandchildren, sisters, Aratha Tripp, Clinton, NC; Isabella McCallop, Brooklyn, NY; Christine (Elwood) McPhail, Clinton, NC; brothers, Henry Earl (Betty) Stevens, Faison, NC; and Joseph (Lenora) Stevens, Goldsboro, NC. She also leaves her sister-in-law, Florence (Rudolph) Becton, Warsaw, NC; adopted sister/special friend Corrine Richardson, Baltimore, MD, a host of nieces, nephews, cousins, other relatives and friends.

On Wednesday, October 27, 2021, Thelma Marie Herring received the call to eternal reward, transitioning peacefully to the will of God. She is now resting in her new home with the Lord. Thelma, (affectionately called &#8220;Rea&#8221;) was born... View Obituary & Service Information

The family of Mrs. Thelma Marie Herring, created this Life Tributes page to make it easy to share your memories.