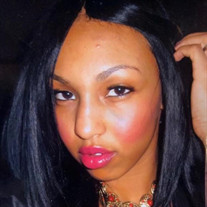 God called Talathia Teara Catrice Smith home on March 19th, 2021. Talathia was born on January 26th, 1993 in Baltimore, MD to Tonia Holly and Alafia Smith. She received her education and graduated from the Howard County Public School System. Talathia was always one of a kind, playing with slime and other things the average kid would find icky. She had a passion for helping others, starting with an interest in forensics. Talathia always found a way to help those who needed it most. She worked many jobs, one of which she was a Home Health Caregiver. Talathia also pursued a Pharmacy Technician Certification. Liable to be anywhere at anytime, Talathia truly touched the lives of everyone she encountered. Ms. Feisty is what you might first think of her, but to truly know Talathia is to love her. Her heart and spirit was that pure. She would give her last and make things happen by any means necessary for those she loved. But, now let me really describe Talathia, or better yet Boo, Lay Lay, Lay, Tee, BooSkola, Fat Mama, White Girl, Skinny, Sis and how could we ever forget Swizz! Before she was heard, she was seen because a show stopper is what Talathia was. Her fashion sense was out of this world. She could throw on anything and command a room. If the dress code was black and white, expect her to show up in sequins. Don’t let her get frustrated, that’s when her outfits would really come together. Not just her clothes, but her hair as well. Blue and blonde wigs, orange braids, or her natural hair curled. However, she was feeling was expressed through her appearance. If you thought her outfits was something, her personality was the icing on the cake. Silly, playful, outgoing, street smart, spiritual, protective, you name it. You could always find Talathia laughing, joking, singing, dancing, making people smile, and lifting everyone’s spirits. When she whipped her phone out, video camera on, you knew it was going to be a movie. Nothing but good vibes and love radiated from Talathia. Tough and about her business, yet playful and childlike, Talathia was the total package. One thing Talathia didn’t play about though was God. A God fearing and God loving woman is what she was. Bible always by her side (big or small). Spreading positivity and spirituality to everyone she met. No shame in her game either. God came before any and everything else. Next to her unwavering love for God, Talathia loved her family to no end. You couldn’t tell her nothing about her family. Don’t let nobody play with her brother, sisters, cousins, nieces nor nephews. Only Lord knows what she would do if somebody played with her mother. I don’t think y’all heard me. Don’t play with her mother! For Tonia, Talathia would move mountains just to see her happy. Talathia loved to kick it with her dad, Lafia. Always calling him just to talk and vibe, and even to get advice when she needed someone to talk to. Her siblings who she loved dearly, each in an individual way. The twins - Alaiah and Alafia. Shameeka - always encouraging each other with their unique ideas. Typoo - cousin but more like sister, always having her big cousin Lay Lay’s follow up. Tyeteona - the one who understood her frustrations. All Talathia ever wanted was to be understood. Tanae - the one who looked up to her big sister with admiration. The one Talathia could always call on to get business taken care of and to have a listening ear when she wanted to pour her heart out. And Tute - her big brother. Her heart! Before all the rest, there was Tute and Talathia. He had her back through WHATEVER. When she called, he was there! Preceded in death, grandfather Cleveland Brown and #1 aunt, Tiffany Lane. Talathia leaves to mourn her mother and stepfather Tonia and Ron Holly, her father and stepmother Alafia and LaTonya Smith, second favorite mother LaTeachia Roberts, siblings Anthony “Tute” Sye (older brother), Shameeka Smith (older sister), Tanae Smith (younger sister), Tyeteona Harding (younger sister), Alaiah and Alafia Smith (younger sister and brother), step siblings Brittany Perry, Tyonna Holly, Dominique Smith, Kya Wilson, and Mya Queensbury, nieces and nephews Mason, Jaiyah, Cevannah, and Amari Sye, grandparents Audrey Thomas, Barbara Langley, and Sheila Allen, and a host of cousins, aunts, uncles, friends, and extended family.

The family of Ms. Talathia Catrice Teara Smith, created this Life Tributes page to make it easy to share your memories.