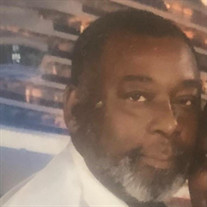 Steven Earle Hayward Sr. was born on June 6, 1959 in Baltimore, Maryland to the late Robert N. and Lenora D. Hayward. Steve was summoned home to a well-earned eternal rest by our Lord and Savior Jesus Christ to take his final flight to glory on May 19, 2021. Steven was affectionately known as Steve and Pop Pop to the kids. He was educated in Baltimore City Public School System and graduated from Mergenthaler Vocational Technical High School “Mervo” in 1978. Steve was enlisted in the United States Army and later retired from the Baltimore City Department of Public Works after thirty years of service. In the mid eighties Steve met Yvonne Woodson and was later united in Holy Matrimony on August 18, 1990. Steven was blessed with two beautiful children Chanell “Thomasien” Holmes and Steven E. Hayward Jr. Through the union with Yvonne, Steve was granted two additional beautiful daughters Jovonne Lane and Davonne George. Steven accepted Christ at an early age and his parents even thought that he would be a preacher. He attended Ebenezer Baptist Church in Baltimore City with his family as a child. Steve loved to spend time with family and to travel. He was a Mr. Fix It and could drive you cross-country on one tank of gas. Steve was very knowledgeable and if he did not know the answer, he would research it until he knew. Steve was loved by all and was the backbone of his family. Steve would end every sentence with his favorite saying “And What Not”. He was a faithful, genuine person with great character. Steve was preceded in death by his parents Robert and Lenora Hayward, his sister Thomasine J. Hayward and one brother, Robert H.J. Hayward Jr. Steve leaves a devoted family to cherish his memories; a loving wife Yvonne Woodson-Hayward, his children Steven E. Hayward Jr., Chanell “Thomasien” Holmes, Jovonne Lane, and Davonne (Pastor Shawn) George; one brother Rev. Cornell L. (Rev. Andrea) Hayward; three sisters Marsha (Don) Gamble, Ada Nichols and Dorothy (Donnie) Bowser; one sister in law, Elder Doris (Bishop Michael) Evans and one brother in law, Elder Joseph Woodson; seven grand children, Dontay Timmons-Holmes, Lamontay Owens-Holmes, Janell Williams, Caleb, Khalil, Kodi George and Peyton Gilliam; one great grandchild Ju’Shawn Timmons- Holmes; a special friend Kevin Shearn and a host of extended family, friends, cousins, nieces, nephews and grandchildren. Even you ______________. (insert your name) II Timothy 4:6-8 For I am already, being poured out like a drink offering and the time for my departure is near. I have fought the good fight, I have finished the race, I have kept the faith. Now there is in store for me the crown of righteousness, which the Lord the righteous Judge will award me on that day and not only to me, but also to all who have longed his appearing.

Steven Earle Hayward Sr. was born on June 6, 1959 in Baltimore, Maryland to the late Robert N. and Lenora D. Hayward. Steve was summoned home to a well-earned eternal rest by our Lord and Savior Jesus Christ to take his final flight to glory... View Obituary & Service Information

The family of Mr. Steven Earle Hayward, Sr. created this Life Tributes page to make it easy to share your memories.