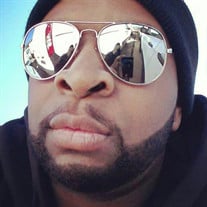 On March 25, 2022, Stephen Holton was called to an eternal rest after a lengthy illness. Stephen Warren Holton was born November 16, 1976, to Phyllis and Steven Holton. He was the first born from this union. He grew up in Baltimore City and was educated in the Baltimore City School System where he received his high school diploma from Walbrook High School. He then worked for many years as a security officer at Saint Agnes Hospital. Stephen had a very close and loving relationship with his mom who raised him and his younger sister, Stacey, as a single mother. He was often referred to as her “Twin” because he looked so much like her. Shortly after graduating from high school, Stephen met Antwoinette Jackson, who became the love of his life and his partner for twenty-six beautiful years. Together, they share three children, Tatyana, Steven, and Alecia Holton and two grandchildren, Kiari and Kehlani Williams. Stephen enjoyed spending time with family and friends, playing and watching basketball, listening to music especially R & B, eating good food and being around people in general. He was known for striking up conversations with random people and for forming close relationships with the least likely individuals. He was easy going, known for always “cracking” a joke especially, to break up tension or stress in serious situations, and he was loved by all who knew him well. Many people relied on Stephen when they were in need. He seemed to always have a referral for someone. From the person in need of a job, or a mechanic to the one in search of a “fire stick” for the T.V. a particular clothing item or a good place to eat, Stephen always had the answer. Stephen was “The Plug.” Stephen had a strong work ethic. He was dedicated and reliable, often working overtime and on his days off. At one point, he had four jobs. During his downtime, one of his favorite things to do was spend time with his grandchildren who affectionately called him “Pop pop.” His presence will be missed by all. He leaves to cherish his memory: his life partner; Antwoinette Jackson, his three children; Tatyana, Steven and Alecia Holton, his two grandchildren; Kiari and Kehlani Williams, his mother; Phyllis Holton, his father; Steven Holton, his sisters; Stacey Holton and Vanessa Griffin, his grandmother; Evelyn L. Briel (Frederick), one aunt; Michelle Love-Davis (Yhones Davis), four nieces and two nephews, his best friends; Arnold Horsey, Carmen Cage and Eric Brown, and a host of other relatives and friends.

On March 25, 2022, Stephen Holton was called to an eternal rest after a lengthy illness. Stephen Warren Holton was born November 16, 1976, to Phyllis and Steven Holton. He was the first born from this union. He grew up in Baltimore City and... View Obituary & Service Information

The family of Mr. Stephen Warren Holton created this Life Tributes page to make it easy to share your memories.