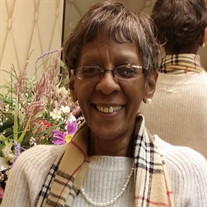 Shirley Mae Steele (Owens) affectionately known as “Precious” to many, daughter of the late Shirley Barnes (Owens), William Barnes Sr., and Alvin Fields (Biological) born on May 3rd, 1954 in Greenspring, MD departed this life on November 18th, 2020 after dealing with an illness. Shirley “Precious” attended Fort Garrison elementary school where she was the only black student attending. While attending Mervo Vocational Tech High School (Mergenthaler) she majored in Seamstress. Sewing was one of her many passions. She has made Wedding gowns, skirts, pants etc. If you wanted it, she could make it. She graduated in 1972. Years later she decided to pursue another passion of hers by graduating from PTC Career Institute in February 1986 as a Geriatric Nursing Assistant. For the past 25 years plus up until the day she was not longer able to work, she was an employee at Bridge Park (Millennium) Nursing Facility. Starting as a CNA/GNA, Unit clerk, Transportation specialist, any other hat she wore, ending on the note as the Front Desk Associate. Over the years, she also attended BCCC to further her nursing education. Shirley “Precious” did not have an actual church home, but she believed in the Lord and Savior Jesus Christ with all her heart and soul. From 1973-1979, Shirley “Precious” was married to Ralph R. Steele, Sr. and from this union three children were born. In her later years, she met Michael Williams, Sr. who was her partner until the end. Shirley “Precious” “Swee-Swee” (a nickname shared between her and her sister later adopted by her niece) was loved by all that encountered her. To know her you had no choice but to love her. She always made everyone feel at home, was extremely passionate, caring, soft spoken, hard working and always had an ear or a shoulder for anyone in need. Shirley “Precious” was a strong little cookie. She beat bladder cancer in 2016 and was able to retire from Bridge Park (Millennium and/or the many other names) in July 2019. What a celebration we had!!!!! She was proceeded in death by her parents: Shirley Barnes, William Barnes, Sr. and Alvin Fields, her brother, William Barnes Jr., and very good friend Melinda Tates. She leaves to mourn: one daughter, Taneisha Steele; two sons, Ralph “Man” (Bridgett) and Steven “Mikey” Steele (Dominique); Seven Grandchildren, Anthony Steele (Jasmine), Essence Steele, Shymik Washington (Tadajah), Dushon Jenkins, Tyshaun Steele, Brittany Steele, Da’Miya Washington; Four Great-Grandchildren, A’Leyah Jackson, Jace Hill, Kerrington Steele, Skai Washington (arriving any day); one Uncle, William “Hunky” Owens (Linda); one sister, Mary “Swee Swee” Jones (Richard); one brother, Kevin Barnes (Adrienne); nieces, Lakisha Cruz, Heaven and Christian Barnes; nephews, William “Tre” Barnes III, Kevin Barnes Jr.; one Great Niece, one Great Nephew, two Great-Great Nephews, additional nieces and nephews including Turon Williams who always had his auntie's back, cousins and a host of relatives, extended family, and friends. She also leaves to the father of her children Ralph Steele, Sr. and special friends Michael Williams and Addie Bethea.

The family of Ms. Shirley Mae Steele created this Life Tributes page to make it easy to share your memories.