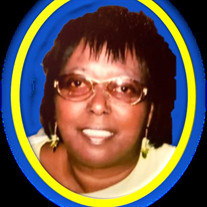 Shirley Lee Briggs, daughter of the late Gracie Mae Briggs and the late Nelson Wilder, was born on June 28, 1947 in Summerton, South Carolina. After a short illness and discussion with her angels, Shirley claimed her wings and took her final flight toward Heavenly Boulevard on Friday, June 5, 2020 at Future Care – Courtland in Pikesville, Maryland. As a child, she received her education through the Clarendon County School System in South Carolina. Upon migrating to Baltimore as a teenager, she attended and graduated from Frederick Douglass High School. The oldest of four siblings, Shirley was raised in a God-fearing and loving home along with Sadie, Jeremiah, and Joseph. At an early age, she joined the First St. Stephens Baptist Church under Rev. Dr. George Jackson, Sr. and served as a founding member for over 30 years. During her tenure at First. St. Stephens, she served as the Church Clerk and was an active member of the Senior Choir, Flower Circle, and Ushers’ Ministry. Being the concerned “Big Sister” that she was, she departed First St. Stephens with a desire to look after her sister and brother-in-law as they started their personal ministry. As a result, Shirley joined the Supreme Harvest Refuge Temple Ministries in 2000 where she served faithfully as a Treasurer. During her latter days, she worshipped with her daughter at First St. Stephens Baptist Church. Over the years, Shirley developed a strong resume and was a very dedicated worker, but her greatest joy was working with children. It was no surprise to her loved ones and friends when she opened the B & P Family Daycare in the early 1990s. Her passion to provide care for children lead to lasting relationships with those that crossed the doors of her home. She held a personal bond with Nor’Mya Faith Jones. Shirley enjoyed cooking her favorite dishes such as baked and barbecue chicken, but she was well known for her famous potato salad. The event was not complete until Shirley’s Famous Potato Salad arrived. Her favorite past-times were watching Young and Restless and attending Quartet Concerts. Her love for quartet music was indescribable and led to her being a member of the Supreme Highlights’ Fan Club. Shirley was a blessing to all those that crossed her path no matter the length of time. Her smile was infectious, and her kind spirit was contagious. She was will be sorely missed and we look forward to seeing her again beyond the sky. Shirley is now reunited with her parents and her nephews (Joseph, Jr. & David Briggs). She leaves to mourn and cherish her memory: a devoted daughter—LuChanda Briggs; a loving sister—Sadie Prioleau; two caring brothers—Jeremiah and Joseph, Sr. Briggs; one sister-in-law—Zelma “Cookie” Briggs; one brother-in-law—Thomas Prioleau, Jr.; three nephews—Bryant Carter (Cassandra), James Briggs, Sr., and Antonio Prioleau; one niece—Tokiko George; one great niece—Jomirrea Briggs; one great nephew—James Briggs, Jr.; four long-time friends—Lena Stevenson, Shirley King Dallas, Gloria Jerry, and Sandra Lane; a host of cousins, relatives, and friends as well as the Supreme Harvest Refuge Temple Ministries’ and First St. Stephens’ church families.

Shirley Lee Briggs, daughter of the late Gracie Mae Briggs and the late Nelson Wilder, was born on June 28, 1947 in Summerton, South Carolina. After a short illness and discussion with her angels, Shirley claimed her wings and took her final... View Obituary & Service Information

The family of Ms. Shirley Lee Briggs, created this Life Tributes page to make it easy to share your memories.