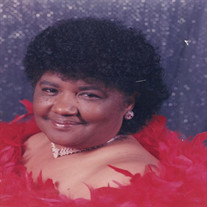 Sherry Smith Chestnut was born to the late Willie James, Sr., and Elease White-Smith on May 8, 1957 in Baltimore, Maryland. She was the youngest (or as she would always say, I’m the baby) of eight children. She went home to be with her Lord and Savior, Jesus Christ on October 5, 2020, at Home under a number of caregivers: her three sisters: Esther, Thelma, Vivian and her niece, Veronique. She was also followed by Gilchrist hospice staff, one special caregiver Jacqueline of Loving Care Home Support. She was preceded in death by sisters, Evelyn Wilmer, Joyce Allen, Maggie Lee Johnson, brother, Willie James Smith, and her stepson Samuel Donte Chestnut. Sherry received her education in the public-school system of Baltimore Maryland. She graduated from Northwestern High School, May 1976, year of the Bicentennial. Sherry continued her education by receiving Certificates in Vital Sign in 1980, At Community College of Baltimore she received her certification as a CNA/GNA in 1981, continuing to be certified at Catonsville Community College as a CMT in 1984. Sherry started out as a companion at University Hospital for the State, working through R.J. Washington and Associate Agency, 1980, continuing to work at Garrison Valley Nursing Home 1983 as well as Herbert House 1984-1985, Later to start working with Levindale Nursing Home May 1985 total years of 34. Sherry was a caring, anonymous giving person to strangers, family, and friends. Sherry’s love for children led her to adopting families with children for six years doing Christmas. Her passion was to cook and entertain for parties given at her job and home. Her specialty was Macaroni and Cheese and Candied Sweet Potatoes. Sherry was united in holy matrimony to the late Samuel Ray Chestnut on September 6, 1986. This union lasted twenty-three years. With that union there came one stepson, whom she referred to as my baby. Sherry was raised in a loving Christian home whereby she gained strong morals and spiritual belief. In her youth, Sherry joined and was Baptized at Sweet Hope Free will Baptist Church in Baltimore. Later she moved her membership to Gillis Memorial Christian community Church under the guidance and leadership of Reverend Dr. Theodore C. Jackson, Jr. In 2016 She rejoined Sweet Hope Free Will Baptist Church under the guidance and leadership of Reverend Terry G. Thornton. Sherry leaves to cherish her memory: Three sisters Esther Smith, Thelma Smith-Brown (Dr. Johnnie A. Brown), Vivian Smith-Taylor (Late Jenifer Wayne Taylor), Brother-in -law, James Wilmer, Sister-in-law Patricia Smith; two God sons Brian Proctor (Wife Nicole Proctor) and Randy Bernard Jones, In-Laws, Aaron Chestnut (Eugniea), and Peggie Chestnut, 12 nieces and nephews, 30 Great niece and nephews, 5 Great Great niece and nephews; Two best Girlfriends Yolanda Proctor and Gina Hall who was just like a sister, Her Levindale sisters were Antonette William, Michelle Herbert, Donna D. Myles, Deborah Wilkson, Veronica Basey and Veronica Jenkins, her Levindale Mom and Godmother, Marion Warren and a host of cousins and friends. She holds Precious memories of two nieces Sharon Smith and Terry Crawly, one nephew Clerow Myers, III, and one Great nephew Donta’ Smith who also preceded her in death.

Sherry Smith Chestnut was born to the late Willie James, Sr., and Elease White-Smith on May 8, 1957 in Baltimore, Maryland. She was the youngest (or as she would always say, I&#8217;m the baby) of eight children. She went home to be with her... View Obituary & Service Information

The family of Mrs. Sherry Smith Chestnut, created this Life Tributes page to make it easy to share your memories.