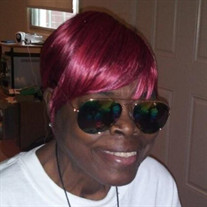 Sheila Ann Palmore-Shellington, beloved Mother, Sister, and Grandmother was born on January 3 1955 and entered eternal REST on Sunday September 20, 2020. Sheila was the first child to the late Christine D. Johnson-Smith and Ulypsis Watson. Sheila was a part of a set of Twins, Shirley of which she departed this life at a very early age of(18months). Sheila was educated in the Baltimore City Public School system of which she attended Walbrook Senior High School. Sheila has encountered life's issues as a school kid as we all have and she has displayed a teenager as someone who was determine to deal with any situation be that what it may, rather if it was popular to all or not. Sheila was Sheila. Sheila gave birth to one child her precious little girl "Katina Shonte Johnson" on June 6, 1974 and all of her sibling kinda fought over to hold her and support Sheila in her new MOMMY life. Sheila later met and married Carl Palmore and this union lasted for several years and due to life's strain caused them to divorce but they remained as good friends.( how many of us can say that). She eventually met and married Samuel Shellington which they remained married until his passing. Sheila affectionately was called Little Big Sis, Sheila Ann, or just SHEILA. She will be missed by everyone that truly new her. Sheila Leaves to cherish her precious memories her only Daughter Katina Shonte Johnson,(4) Grand children Ryan Johnson, Shontevya Thompson, Brian Thompson Jr. and Charles Turner IV and one Great Grandchild Faith Thompson . (4 Sisters) Elizabeth Jones, Linda Smith of Baltimore, Carol Kelsy and Mary Ann Smith of Trenton New Jersey. (3 Bothers) Elijah Smith jr.(Jay-R), Issac R. Smith Sr. and Willie Smith of Baltimore. 2 Brother-in-Laws Fred Jones and Ralph Kelsy, 2 Sister in-law Stephanie Smith and Karen Smith (3 Nieces Tyree Smith, Brandie Smith and Diamond Smith of Baltimore and 6 Nephews Christopher D. Smith affectionately known by Sheila as pusshea d. Issac JR., Devan Smith, Donnell Frederick (Speedy) of Baltimore Michael Smith and Leonard Smith of Trenton New Jersey She also leaves a host of relatives and friends, a special Aunt Ethelina (Aunt Bunch) Cousin Rosalind Williams to all of which was an integral part of her life

The family of Ms. Sheila Ann Palmore-Shellington, created this Life Tributes page to make it easy to share your memories.