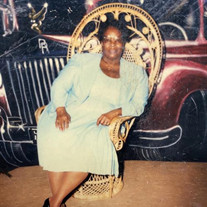 Ruth Jones (born Ruth Page), daughter of the late Pauline Bellamy and Hardy Page was born April 14,1927 in Chadbourne, North Carolina. She quietly departed this life on August 18, 2020. Ruth was one of eight children. ----six of whom preceded her in death. Hardy (AKA Pete), James Edward, James (AKA Pop), and William Paul; two sisters Mildred and Mary Wiladean. She has two surviving sisters Gladys Thompkins and Ediglee Scott. Ruth was also preceded in death by her only child, Amberline Page, who was graced to sleep peacefully with the angels at the tender age of two years old. Ruth moved to Baltimore in 1948. In May of 1952 she met and married the love of her life, Charlie Jones Jr. Ruth loved the Lord and was initially baptized at Mount Zion AME Church in Zion, South Carolina. In later years, she joined Rising Sun Baptist Church. There she served in the kitchen and on the Usher Board. Ruth and Charlie were fondly called “Cou Ruth” and “Daddy” Charlie. Their true passion was children. Perhaps it was because the one child Ruth birthed ---- passed so early in life. Although they never had any biological children of their own, God blessed them with enough resources to share their love with children that needed a place to call home. That home was located on the corner of Oliver St. & Rutland Ave. They happily used it to raise many children in the family. ----Thereby ensuring that they maintained relationships and connections with family members. Her home was always open to the orphaned and/or displaced. …….. Including family, friends, and even those in need within the community. To add to that, God gave them plenty of children to call their own… Their adopted children include John Edward Jones (who preceded her in death), Anthony Jones, Lawrence Alexander, Darnell Jones and William Rogers Jones (who preceded her in death). Cou Ruth and Daddy Charlie were known as the father and mother of their entire family. However, as God would have it, in November 1981 the Love of her life went home to be with the Lord, leaving Ruth to carry on their legacy. Although Daddy Charlie was absent, Cou Ruth, was not alone. She became known as ‘The Mother of all Mothers’. She continued to raise children in her home on Oliver Street. To some she was an adopted mother, to others she was a foster mother, and if that wasn’t enough, she was also a surrogate mother. There are many who can attest to the fact that for more than 60 years, Cou Ruth was indeed the shoulder they needed to lean on. She was there for whatever you needed…… Whether it was a word from Christ, a frozen confection like a frozen cup or snowball, a few dollars or just sage advice ---- she made herself available. We were blessed to have Cou Ruth for 93 years. She was wise and definitely funny. Some of the words she shared were ……. “The seeds you sow, you shall also reap. Love everybody despite how they treat you, because that’s what God does for us.” When she sang, she sang every song as if it were a Jazz special. In the words of many, Cou Ruth did things in her own way. She was truly loved by everyone whose life she touched. As she grew older, and lost her mobility, some of those same children came to her aid. She loved each of them dearly for their sacrifice. Among them are, Charlena Jones (Her Black Baby) Michael Blackwell (Her grandson) Tina Bogier (daughter, who preceded her in death), her granddaughters Gidgette Rogers and Dana Jones, her nieces Cornella Johnson and Michelle McLeod Memories of Ruth Jones will forever be treasured in the hearts of her surviving family members to include…….2 sisters, 4 Sisters-In-Law, 3 Brothers-in-law, A host of grateful children whom she raised, nieces, nephews, grandchildren, family and friends.

Ruth Jones (born Ruth Page), daughter of the late Pauline Bellamy and Hardy Page was born April 14,1927 in Chadbourne, North Carolina. She quietly departed this life on August 18, 2020. Ruth was one of eight children. ----six of whom preceded... View Obituary & Service Information

The family of Mrs. Ruth Jones, created this Life Tributes page to make it easy to share your memories.