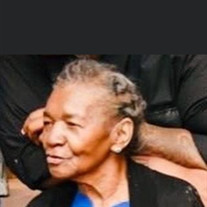 Ruby E Williams daughter of the late Lee Keel and Ethel Keel was born on May1,1932in Richmond ,Virginia.She departed her life on July7,2020 after a lengthy illness. Ruby received her education in Richmond ,Virginia public school.She moved to Baltimore Md with her husband Robert Williams.She was employed at Baltimore city public schools as a custodian were she retired after 30yrs. She married the late Robert Williams and out of this union 9 children were born,Patricia, Robert Jr, Gregory, Ronald, Linda, Robinette, Mary Ann,Lisa, and Barbara. Ruby Made numerous of friends and will be sincerely missed by everyone. She was a loving , generous, kind hearted woman. She leaves to mourn: Five children,Gregory,Linda,Maryann, Lisa, Barbara, Proceed in death her husband Robert Williams, and four children Patricia, RobertJr., Robinette, and Ronald , and also her two sisters and three brothers, she leaves behind a host of nieces ,nephews, grandchildren, and great grandchildren, and friends.

The family of Mrs. Ruby Eleanor Williams, created this Life Tributes page to make it easy to share your memories.