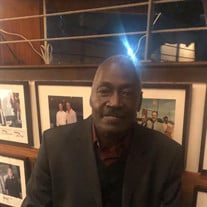 Roy Oliver Via, the son of the late Roy Lee Via and Mary Florence Via, was born February 12, 1958 in Baltimore, Maryland.  God in his infinite love and wisdom, saw fit to call him home on Wednesday, December 1, 2021. “Snooky”, as he was so fondly called by his family, was educated in the Baltimore City Public School System.  In 2012, he earned an Associates Degree in Christian Education from Global Bible University.  Roy had a host of professions that he was very proud of including Bethlehem Steel Shipyard as a laborer and New Vision House of Hope as a Board Member. For most of his life, Roy used his labor skills to work as a freelance licensed contractor. He also used those skills to give back to his church community, friends and colleagues. Roy was a hard worker with a determined spirit. Roy was a kind person, who genuinely loved his family and friends. He loved participating in social gatherings and events with friends and fellow board members and always looked forward to them.  Everyone saw him has a kind hearted man who always wanted to make you laugh with a joke and put a smile on your face with one of his “famous” stories.    In his 50s, Roy accepted Jesus Christ as his savior and that was a turning point in his life.  He was vigilant in studying and learning God’s word and would often quote his favorite scriptures. Roy always attended Sunday services in his best suit and hat ready for the word.  Roy was preceded in death by two of his brothers, Harry Carmichael and Kenneth Carmichael, and two sisters Mary Abrams and Clarice Via.   Roy leaves to cherish his memory, his daughter, Cynthia Via, one sister, Katina Via three brothers, Marvin Carmichael Randolph Via and Rudolph Via, a brother-in law, Randy Abrams, a special niece Kendra Carmichael, a forever friend Cynthia Edmonds, and a host of loving family and friends.

The family of Mr. Roy Oliver Via created this Life Tributes page to make it easy to share your memories.