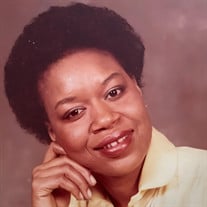 Daughter of the late Willie Williams Sr. and Daisy Clavon Williams. “Bobby” as she was affectionately known, was called home to glory on March 25, 2022 after a lengthy illness. Roberta was born in Lee County, South Carolina but relocated to Baltimore, MD with her family in 1950. She received her education in Baltimore City Public Schools. Bobby graduated from Frederick Douglas Sr. High in 1967. She was enlisted in the US Army from 1969 - 1972. She married the late Robert Carter in 1988. After taking business classes at CCB she began working as an accountant at different engineering companies. On Sept 07, 1999 she began working at EBA Engineering, little did she know it would blossom into not only a career but a family, she loved her work family and spoke of them often. The love she gave them was given right back. The bond they shared was shown in the way they loved and respected Bobby. Bobby retired from EBA on July 31, 2019. Bobby joined St. Timothy Baptist Church in 2018 and remained a faithful member until her passing. Bobby loved praising God, Bible study and singing one of her favorite songs, I Come to praise. Her favorite hobbies were bowling and spending time with her family. She will be missed by all who knew and loved her. Bobby siblings, Willie Williams Jr., Lilly Jones, Charles Williams and baby boy Williams preceded her in death. Bobby leaves to cherish her memory two sisters, three brothers, one brother-in-law and two sisters-in -law; Mae Cross, Jon Williams (Vera), Phillip Williams (Vera), Raymond Williams, Maria Greenidge (Sam), and a host of nieces, nephews, relatives and friends.

Daughter of the late Willie Williams Sr. and Daisy Clavon Williams. &#8220;Bobby&#8221; as she was affectionately known, was called home to glory on March 25, 2022 after a lengthy illness. Roberta was born in Lee County,... View Obituary & Service Information

The family of Mrs. Roberta Carter, created this Life Tributes page to make it easy to share your memories.