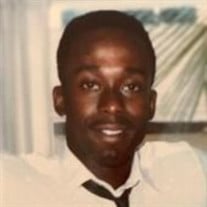 Robert Lee Waker, son of the late Fred and Loraine Waker, was born on February 1, 1961, in Baltimore, Maryland. He was granted his angel wings on May 12, 2021, in Hawthorne, California. At an early age, Robert had a thirst for knowledge and was determined to receive high honors and become successful. He received his education in the Baltimore City Public School System and graduated from Frederick Douglas Senior High, class of 1979. He continued to pursue his education and attended Morgan State University where he received a bachelor’s degree in Physics and Engineering, all while following in his brothers’ footsteps and joining Pi Beta Sigma Fraternity Incorporated, Gamma Chapter in 1981 and made a lot of friends. Upon his graduation from college with honors, making the Dean’s List at Morgan, he was highly sort after for a career in Engineering. He moved to Los Angeles, California in the summer of 1984, and began working as an Aerospace Engineer for McDonald Douglass for several years. He also continued his quest for knowledge and studied Education at the National College of Natural Medicine, California State University, Dominquez Hills (receiving certification in Electrical and Systems Engineering); and North Carolina Agricultural and Technical State University. Nevertheless, he desired to share his world of knowledge with others and became a Physics teacher in August 1992 with the Los Angeles Unified School District. He would embrace this career and remained a teacher until retiring in November 2019. Robert’s life would seem too short to many, but those who were touched by him understood that the quality of existence far exceeds the quantity of time in which one lives. His gentle smile, warm heart, and generosity brought so much joy to his family and friends. Robert was a caring soul who genuinely loved his family, and everyone he came to know in his life. He was your friend to the end, a brother from another mother, and no matter if time would pass, whenever you connected with him, it was like you were never apart. (Lee) as we called him, was a delightful cook who could whip up any tasty cake recipe. He liked to attend Jazz Festivals and traveling to Los Vegas and Mexico. He enjoyed watching sports and won several FLIGHT KLUB CHAMPIONSHIPS. (CBS SPORTS FANTASY). Lee also loved keeping up with politics and current events. Oh, and said by some of his friends and family in Cali, “he liked to go to the $.99 cents store.” Now, going to $.99 cent store may have been something he enjoyed, but if you were with him in any setting, he would spend top dollar for everyone to have a joyous occasion. “No one would lack anything in his presence.” Robert will be greatly missed. He was a loving son and brother, uncle and nephew, and friend. Robert was also preceded in death by five siblings: Verma; Melvin; Eponious “Freddy;” Michelle; and Calvin.” He leaves to mourn brothers Jessie, Rajah, Gregory, Norman, and sister Lenea; three nieces; Andrea; Nicole Poole (Ransome); and Erika; six nephews; Damon; Melvin (Rachelle;) D’Andre (Jenna); Lavar; Keith and Darian; several great nieces and nephews; and a host of relatives and friends.

Robert Lee Waker, son of the late Fred and Loraine Waker, was born on February 1, 1961, in Baltimore, Maryland. He was granted his angel wings on May 12, 2021, in Hawthorne, California. At an early age, Robert had a thirst for knowledge and... View Obituary & Service Information

The family of Mr. Robert Waker created this Life Tributes page to make it easy to share your memories.

Robert Lee Waker, son of the late Fred and Loraine Waker, was...