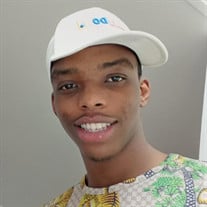 Robert Lee Parks III, known by most as “Lil Robert” was born February 15, 2002 to parents, Shavone McCoy and Robert Parks Jr. Robert suddenly departed his life on February 16, 2022. At a young age, Robert loved riding bikes, scooters, and skateboards. He became very talented in riding bikes and skateboards doing tricks on both at many skate parks, bike ride outs and much more. Robert was talented in many other activities such as basketball, football, and lacrosse, awarded trophies in all. Robert was intelligent beginning during Head start, when starting Elementary school he was above grade level and excelled to middle school being excepted in Advance Academic Program with all honors classes. At 18, he participated in a Black History competition and came in 2nd place with big praises from his instructor (stating he should've been in 1st place). Robert received his diploma at 18 boy was his mom and family proud of him. YAY!!!!! Gaming, dancing and different types of music became his favorite pass time. Robert was happy just to spend time with his mom, stepdad, girlfriend and really loved when his niece would visit for the weekend. Robert will truly be missed by many. Robert was charismatic, funny, silly, down to earth and loved by almost anyone he came in contact with. Although Robert loved his family, the love he had for his mother was beyond the moon, he shared a special bond with her and between the two of them they would go to the ends of earth for each other. His stepdad was also a special person in his life. His sister, niece, cousins, and girlfriend was his rocks and he loved spending time with them all and let's not forget his bonus sisters and brothers. Robert leaves to mourn his death: (mother) Shavone McCoy (Michael); (father) Robert Parks Jr.; (sister) Shaniera Parks (Qawayne); (niece) Samiya Smith; (2 grandmothers) Patricia McCoy & Kathleen Chandler; (2 aunts) Sharee Ward (Darrell) & (preceding in death) Tanier Parks; (2 uncles) Roy & Darius Wimbley; (cousins) Shaniya, Shaniece, Darrell Jr., and Darreus Ward, Akili and Ebony Moore, Aaliyah & Jr Fitzgerald; (girlfriend) Don'naza Burton; (bonus sister and niece) Krissy and Zaria; (2 special friends) Gary and Tracy and a host of family, friends, and relatives.

The family of Mr. Robert Lee Parks, III created this Life Tributes page to make it easy to share your memories.

Robert Lee Parks III, known by most as “Lil Robert” was born...