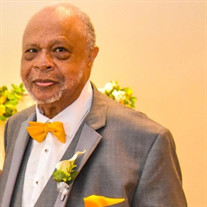 Robert Lee Martin, son of the late Jerry and Flora Martin, was born on February 15, 1947 in Saluda, South Carolina. Affectionately known as "The Baby Brother", he was the youngest of nine children and was preceded in death by five brothers: Thomas "Fats", Louis "Walt", Jeremiah "Reds", James Oscar, and Deacon Odell "Boy" Martin. On Tuesday, June 02, 2020, Robert Lee was called home to rest after battling a hard fought illness. Robert Lee, received his early childhood education in the South Carolina Public School District and then later moved to Baltimore, MD with his family at the age of ten. He later resumed his education in Baltimore City Public Schools. In 1966, he was called to serve his country in the United States Army. He later received an Honorable Discharge for his commendable service. Soon after returning home from the military, Robert Lee began working at Navistar International. He retired after 30+ years of dedicated service. On July 29, 1972, Robert Lee was joined in holy matrimony to Barbara Linda Dunston. From this union, one son Quentin and one daughter Crystal were born. Robert Lee enjoyed life. He especially enjoyed watching baseball (His beloved Orioles). He was a man who took pride in his clothing and knew the meaning of a good suit and hat. He would often tell his son, Quentin, that every man should have a suit in his closet; advice that his son still has yet to take. Robert Lee also enjoyed playing card games, driving his car, spending time with his family/friends, and eating his wife's good home cooking. He would tell anyone that would listen, "Can't nobody cook like Linda". He will surely be missed by all who knew and loved him. He leaves to mourn and cherish his memory: his wife, Barbara (better known as "Linda"); one son, Quentin; one daughter, Crystal; one daughter in-law, Shellia; three sisters, Orabelle Hatch, Kodella "Sister" Davis, and Flora Ann James; one grandson, Kyrie Jackson; two brother in-laws, Johnnie James and Purnell Dunston; one sister in-law, Viola Dunston, one devoted niece, Lisa; and a host of other nieces, nephews, cousins, and friends who all loved him dearly.

Robert Lee Martin, son of the late Jerry and Flora Martin, was born on February 15, 1947 in Saluda, South Carolina. Affectionately known as "The Baby Brother", he was the youngest of nine children and was preceded in death by five brothers:... View Obituary & Service Information

The family of Mr. Robert Lee Martin, created this Life Tributes page to make it easy to share your memories.

Robert Lee Martin, son of the late Jerry and Flora Martin, was...