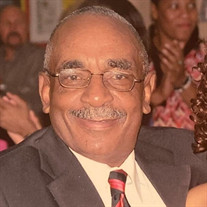 Robert Carter, Jr. quietly transitioned to his eternal resting place on June 15, 2021. He was the first born of eight children of the union between Robert Carter Sr. and Arnetta Beard Carter. Robert was born on April 11,1938 in Craigsville, Virginia where he spent his early  years.  Robert’s parents preceded him in death as well as two of his sisters, Margaret McCarty and Fannie Womble and his brother Stanford Carter. Robert was a loyal and trusted friend to many. He was a generous person who freely gave of himself and  willingly shared his resources with everyone he knew was in need. Robert attended public schools in Baltimore City graduating from Paul Laurence Dunbar High School in 1958.  He was very meticulous about his dress during his high school years and worked at several part-time jobs throughout his school years to maintain his high standards. As a young teenager he also considered himself to be a boxer; however, his life in the ring was short-lived by a decisive first round knock out that made Baltimore newspaper headlines. Robert had an abiding Christian faith. As a teenager Robert was baptized as a member of Charity Baptist Church.  He later joined New David Baptist Church of Christ where he faithfully attended until his health failed him and his mobility became limited. Robert entered the United States Air Force in February 1962 and received an honorable discharge in December 1966.  Most of his armed services career was spent in Mississippi and Maryland.  Following his discharge from the military, Robert went to work for Bethlehem Steel Company where he retired after 40 years of service.   Robert enjoyed life. He loved music and had a collection that included many of the top performers of the 1950’s through the 1980’s. As an example, he collected all of the music recorded by Johnny Mathis among other artists. It was not unusual for him to travel out of State to see his favorite performers.  He attended the inauguration of the Spectrum - 76er’s Center in Philadelphia to see Nina Simone and O.C. Smith. He was an avid reader, especially of western novels. He also carried a cross-word puzzle book  with him most of the time. Robert was no stranger to the road. As an adult he always had a car and did not mind traveling. His travels took him across the country to California on at least two occasions and to most of the Eastern and Mid-western parts of the United States. Robert was an avid football fan. He loved the Colts while they were in Baltimore but quickly switched his allegiance to the Ravens after the Colts left town in the dark of the night. Robert was a member of several organizations. Included among the groups he belonged to were  The Dunbar Class of 1958 Alumni Group, The American Legion Chapter 285, and the VFW Chapters 451 and 8509. He participated in the Bethlehem Lunch Group, a group of retired steel workers. He gave his time freely to each organizations prior to his illness. In each setting, Robert was not hesitant to offer his suggestions. He spent generously and was the first to pull out his “wad” to treat.

Robert Carter, Jr. quietly transitioned to his eternal resting place on June 15, 2021. He was the first born of eight children of the union between Robert Carter Sr. and Arnetta Beard Carter. Robert was born on April 11,1938 in Craigsville,... View Obituary & Service Information

The family of Mr. Robert Carter Jr. created this Life Tributes page to make it easy to share your memories.