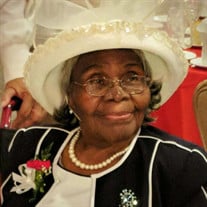 Reddies (Rita) Felder, daughter of the late Mackey and Rose Miller, was born on September 23, 1918 in Clarendon County, South Carolina. She departed this life on Friday, July 17, 2020, after a lengthy battle with Alzheimer/dementia. Reddies BKA Rita received her education in the Clarendon County Public School System. She moved to Baltimore, Maryland in 1941 where she held numerous jobs. To name a few, Dover’s Poultry, Lord Baltimore Hotel and Holiday Inn. She was married to the late Broadway Felder and from that union was blessed with six children. Later in life she met the late Willie House and was blessed with five children. Rita was also affectionately known as Precious, and the life she lived was reflective of that name. All her family knew her as Precious or Aunt Precious. Everyone she came in contact with said that name suited her. Rita made numerous friends wherever she went. Rita loved the Lord and she demonstrated it in her walk. Her favorite scripture was “For we walk by faith, not by sight ( II Cor 5:7). Rita was a longtime member of Arlington-Lewin United Methodist Church (formerly Lewin UMC). She was a dedicated and faithful member as she served with the Communion Stewards, Prayer Warrior Team and the Senior Choir for numerous years. She participated in many activities in the church. Rita can say, “May the Work I’ve Done Speak for Me”. Rita was very active in the Waxter Center for seniors. She received numerous accolades by participating in various programs such as Eating Together and more. She also received the Distinguished Black Marylander Award from Towson State University in 2004. Rita was a strong woman of God. She lived on her own until age 97 at which time she went to Levindale Geriatric Nursing Center after showing signs of dementia. While at Levindale, she received the name “Feisty” from the team on Hall #2. They would say, “Ms. Rita stood her ground and at 100+ she could do that”. Rita (Precious) was loved by so many and will be sincerely missed by everyone who knew her. She was a devoted family woman and a true friend. Rita was preceded in death by her late husband Broadway Felder, a devoted friend Willie House, and five children Betty Dorothy, Billy, Thomas, Bertha Lee and Ricky and a stepmother she loved dearly, Hattie Miller Cann. She leaves to cherish her beautiful memories: 6 children, Mae Blackwell, Louis Felder (Boochie), John Felder, Queen Williams, Eugene House (Norma) and Amanda Mellerson; 1 daughter in-law Sheila House, 26 grandchildren, 38 great-grandchildren, 31 great-great grandchildren, two sisters Carrie Mae Johnson, Goose Creek, SC and Lorraine Johnson, Baltimore, Maryland, 1 sister-in-law Delores Miller and a host of nieces, nephews, other relatives and friends. Our Mother In tears we saw you sinking and watched you fade away; Our hearts were almost broken we wanted you to stay. But when we saw you sleeping, So peacefully and free from pain, How could we wish you back with us, To suffer pain again. It broke our hearts to lose you, But you did not go alone For part of us went with you, The day God took you home. Your Loving Children Grandma, after all your time here with us, we are sad to see you go. But you'll always be in our hearts, more than you'd ever know. All of the cherished memories of you, we will never, ever forget. All the kisses, all the hugs, so much love and encouragement. Grandma, you're now resting easy, taking your place in heaven above. Watching over us as our angel, our heavenly dove. We'll hold onto your spirit because it was so beautiful. Until we meet again, we'll remember to “be good, be nice, be careful.“ Your Grandchildren

Reddies (Rita) Felder, daughter of the late Mackey and Rose Miller, was born on September 23, 1918 in Clarendon County, South Carolina. She departed this life on Friday, July 17, 2020, after a lengthy battle with Alzheimer/dementia.... View Obituary & Service Information

The family of Mrs. Reddies Rita Felder, created this Life Tributes page to make it easy to share your memories.