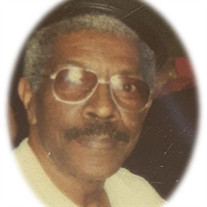 Raymond (Ray) Matlock Lewis, Sr. was born on February 6, 1940 in Tinsman (Little Rock), Arkansas, an only child to Carrie Lee Matlock. He peacefully departed this life on August 14, 2021. Ray received his early education in the Baltimore City Public School System (Cherry Hill) and graduated high school from Baltimore City College. After high school, he immediately joined the US Navy and traveled around the world twice before turning twenty-one. He attended the Community College of Baltimore City, the University of Baltimore, Graduate School in Washington and he received multiple diplomas and certificates from the Department of Defense, the International Association of Computer Security and other US military educational institutes. Ray enjoyed reading and was proud of the high scores he earned at every institute he attended.   Ray also enjoyed his lifelong career as a Computer Programmer and Database Analyst and loved teaching Computer Applications for employees of the US Army Criminal Investigation Command. He was employed by the US Army Reserve Headquarters, Bethlehem Steel Co., the US Navy Regional Data Automation Center, the US Navy Applied Mathematics Laboratory and retired from the Department of Defense. After retirement he took more courses; became a member of The Maryland Society of Accountants, operated his own business and partnered with JPMorgan Chase from 1994 until 2020. Ray was preceded in death by his mother, Carrie Lee Matlock and father Albert Lewis, Jr.  He is survived by his ex-wife Ruby, two daughters, Rosalee Lewis and Rhonda Lewis; two sons, Raymond Lewis, Jr. and Patrick Lewis; five grandchildren, Joshua, Tashika, Terrell, Lakia, and Donnell; five great grand children and a host of cherished relatives and friends.

The family of Mr. Raymond Lewis, Sr. created this Life Tributes page to make it easy to share your memories.