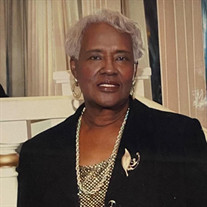 On the early morning of Friday, May 21, 2021, Nancy (McCrae) Tyson peacefully passed away. She was a devoted wife, mother, grandmother, and a devout Pioneer. She entered this life on May 6, 1931 and was the 3rd child of a family of four siblings to the late, Troye and Roxanna (McCrae) Pigatt. Nancy was educated by the Baltimore City Public School (BCPS) System. Despite having children at a young age, she still pursued her dream to become a nurse. Nancy received further education to become a Licensed Practical Nurse (LPN) at the Former City Hospital. She later attended Community College of Baltimore (CCB) Nursing School and graduated as a Registered Nurse (RN). Her perseverance allowed her to advance forward in her career thus provided her the opportunity to be employed at several Baltimore hospitals. Nancy united in marriage with the love of her life the late, Jack (a.k.a. Jake) Tyson, Sr., and out of this union, they had four sons and a daughter, which included a set of twins. Nancy loved music and dancing and BOY, she could dance for hours. She also enjoyed shopping. Nancy learned about Jehovah God from her neighbor and one of her closest friends, Mary Byers. When she heard about Jehovah's ways, she followed him right away. After getting baptized in the early 60's, she moved full steam ahead. She studied with many people and taught them firmly what Jehovah expected of them. In the late 1980’s, Nancy joined the pioneer ranks and volunteered teaching the Bible principles. Nancy was preceded in death by her husband Jack Tyson, Sr. (a.k.a. Jake) and two sons: Leo Brown and Arnold Phillips, and three siblings; brother: Anderson Pigatt, sister: Muzetha (Pigatt) Neal, and brother: John Richard Pigatt. Nancy leaves behind eight children: daughter, Sheila Wisdom (Floyd); sons: Jack Tyson, Jr. (Doris), Kevin Tyson (Vanessa), Ricardo Tyson (Pamela), and Tony Tyson; one daughter, Terrie Nance (Reginald), and a multitude of grandchildren and great grandchildren will remain a part of those who cherish her memory. Nancy was proud of her large family and her wonderful spiritual friends.

On the early morning of Friday, May 21, 2021, Nancy (McCrae) Tyson peacefully passed away. She was a devoted wife, mother, grandmother, and a devout Pioneer. She entered this life on May 6, 1931 and was the 3rd child of a family of four siblings... View Obituary & Service Information

The family of Mrs. Nancy Catherine Tyson, created this Life Tributes page to make it easy to share your memories.