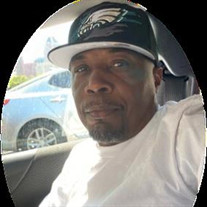 Montay E. Johnson, affectionately known as “ Khalid “ or “ Tay “, was born to the late Delores Johnson-Speaks. Montay was suddenly called home on April 20, 2022. God needed another Angel & Delores needed her only Son. Montay grew up in Baltimore City. He received his education in the Baltimore City School System. He was a Certified Electrician. Better known as Khalid, he brought so much and laughter into people lives. He was smart, strong, a fighter, humble, and such a beautiful soul inside and out. He brought smiles and laughter to everyone around him. He would always make someone else’s problems his. He was a great and amazing father, brother, grandfather, uncle, and friend. He will truly be missed. Preceding Montay in death is his mother Delores Johnson-Speaks. He leaves to cherish his memories: 2 Daughters Quantay & Juda, his Fiancé; Andretta, 3 grandchildren; Sa’Riyah, Jordan, and Jaylenn, 4 sisters; Michelle (Chelly), Catherine (Cathy), Barbara (Sassy) & Lisa (Niecey); 2 stepkids; Tiffany and Marvin, 8 nieces, 11 nephews, and a host of great nieces, nephews and friends.

The family of Mr. Montay Edwin Johnson created this Life Tributes page to make it easy to share your memories.