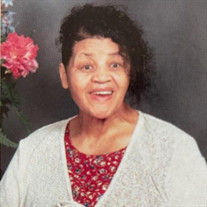 Minnie Louise Booker-Robinson, 90, of Baltimore, MD, went to be with the Lord on May 19th, 2022. Minnie was born on February 25th, 1932, to the late Carrie Booker and William McKinley-Booker in Baltimore, MD. Minnie graduated from Douglas High School at the age of 16. After high school, Minnie pursued a degree in Nursing. Due to some unfortunate challenges, Minnie did not complete her degree. But that did not stop God from blessing her with one of the desires of her heart. As a child one of Minnie’s desires was to have 4 daughters. Although Minnie did not biologically have 4 daughters, she had a daughter, raised her granddaughter Jada, took care of her granddaughter Janae and cared for her great granddaughter Jamiah while her mother worked. Minnie’s grand-kids and her family were a big part of her life and she made sure everyone knew it. Outside of being a proud grandmother, Minnie loved to sing and dance. Minnie was a great cook in her own way and only used salt, pepper and a little season salt. Minnie would say “my mother only used salt and pepper and that’s all I need.” Minnie loved the Lord with all her heart. You could always find her attending church, singing on the choir, attending some type of church function and visiting with family and friends. In her later years she became a member of Edmondson Height Seventh-Day Adventist Church. Minnie loved her new church family as much as they loved her. During her last 8 years she resided at West-Gate Nursing Home, where everyone knew Miss Minnie. Minnie would have everyone singing and dancing with her. Some of the staff enjoyed her so much they would hide in her room just to talk to her because they enjoyed her company. Minnie Praised God when she was walking around, moving around in her wheel chair and when she was confined to the bed. Minnie continued to give God Praise and sing her hymns. And if you visited her on a day her church family was visiting, you better believe they were having church in her room. Minnie was quiet and soft-spoken in her early year. However, in her later years she became more outspoken and expressive. She was not the quiet little girl or soft-spoken woman she used to be. Minnie would put you in your place and bless you at the same time. In spite of her not pursing her Nursing degree nor holding a position as a CEO, CFO or VP; to her family, friends, and beloved church members she was their MVP (Most Valued Person) in their lives. But to her granddaughters she was their MVG (Most Valued Grandmother). Minnie leaves to cherish her memory daughter: Kim Robinson Wright and son-n-law Jerome Wright Granddaughters Jada Holley and Janae’ Wright Grandson-in law Lettie Holley Jr Great grand-daughter Jamiah “Sweet Stuff” Holley, Sisters: Lorraine Drummond, Loretta (Charles) Dunton Brothers: Frank (Evelyn) Booker, Hiawatha (Janice) Mugar. Along with a host of Nieces, Nephews, friends and beloved church members. Minnie never liked to say good bye, she would say just say see you later. And then she would tell you have a Bless day.

Minnie Louise Booker-Robinson, 90, of Baltimore, MD, went to be with the Lord on May 19th, 2022. Minnie was born on February 25th, 1932, to the late Carrie Booker and William McKinley-Booker in Baltimore, MD. Minnie graduated from Douglas High... View Obituary & Service Information

The family of Ms. Minnie L. Booker-Robinson created this Life Tributes page to make it easy to share your memories.