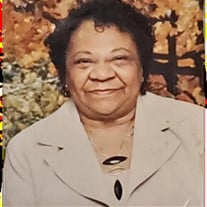 Mildred Childress affectionately known as Millie J was born on November 17th, 1933 in Lawrenceville Virginia by parents Susie Ann Jones from Virginia and Wallace L Dennis. She departed her life on February 21st, 2022. Mildred was the only child of Suzanne Jones and had three siblings from her father Wallace L Dennis SR. Mildred spent her childhood in Lawrenceville Virginia being raised by her aunt Annie Jones Mildred attended Elementary school and went to Saint Paul's College in Virginia, until she married her first husband Salty by age of 21. Although their union didn't last, they remained friends throughout their life. She later relocated to Teaneck, New Jersey where she married her second husband, Tony Childress. They built a home in Teaneck, New Jersey where they resided for many years. In 1969, Mildred gave birth to her one and only daughter, Linda Sue Childress in Englewood, New Jersey. She started her first job at the finest supermarket where she worked for 35 years, until the business closed. Mildred also work for the Department of Social Services in Harlem, New York as an eligibility specialist. In 1985 Mildred relocated to Baltimore Maryland. Mildred was a go-getter and always was able to restart. Her first love in the supermarket industry as a Deli clerk, later resulted a new job at Sam's Club as a demonstration specialist for approximately 20 years. Mildred was a self-less human being, she loved her family. She spent holidays with her family, especially Christmas where she hosted Christmas Eve every year. She always put family needs before her own. She was loved by many for her angelic soul and bright smile. She loved music, especially her Marvin Gaye and Etta James. Mildred had special love for those who adopted her as their mom. Mildred was proceeded in death by her mother, Susie Jones, Father, Wallace Dennis, Sr. Stepmother, Louise Dennis, and youngest brother, Harry (JoJo) Dennis. Mildred leaves to cherish her memory, her daughter Linda Sue Childress, her grandson, Terrell Roland Taylor, her granddaughter, Nyah Nicole Smith who adored her. Her 6 great grandchildren (Terrell) Ronald, Temeea, Terrell Jr, Jerrell, Jontrell, and Kamiah. Her Brother Wallace Dennis Jr (Jean Dennis) Sister Maxine Cook, she leaves two special nieces Latasha and Latoya, as well as a host of nieces and nephews, cousins, and family.

Mildred Childress affectionately known as Millie J was born on November 17th, 1933 in Lawrenceville Virginia by parents Susie Ann Jones from Virginia and Wallace L Dennis. She departed her life on February 21st, 2022. Mildred was the only... View Obituary & Service Information

The family of Ms. Mildred Olivia Childress, created this Life Tributes page to make it easy to share your memories.

Mildred Childress affectionately known as Millie J was born on...