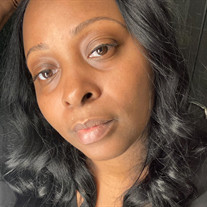 MELISSA LINETTE BARNES BATTLE, beloved daughter of the late Jesse Barnes, Jr. and the late Deborah Cottman, was born on June 23, 1978 in Baltimore, Maryland. Melissa was raised by two very special aunts, Sylvia Means and Geraldine Boyce. She transitioned from this life in the early morning hours of April 9, 2022. Melissa met D’Angelo Battle in 2003. They would exchange marriage vows on March 30, 2020. Melissa was a mother to William Clinton III, when she met D’Angelo. From their union, they would have two additional sons, D’Angelo, Jr., and Damari. She was a devoted and committed wife and mother. Melissa’s love for her family was tireless, selfless and altruistic. Her legacy of “a mother’s love” will live in their hearts forever. Melissa accepted the Lord Jesus Christ as her personal Savior in her teenage years while attending the United Pentecostal Miracle Church. Her love and commitment to the Lord would increase as she grew in faith. Melissa received her education in the Baltimore City Public School System, graduating from Francis M. Wood High School. Following high school, she would earn a license to practice cosmetology at the American Beauty Academy. Although she worked for Black and Decker and Compass Group/Eurest Dining for several years, Melissa would eventually make headway in the “World of Hair”. Her gift was truly in a class of its own! She would use a photo of a desired style and make it a masterpiece. Many family members and friends would call on Melissa to create beautiful hair styles for them. She also loved singing for the Lord Jesus, whom she loved with all her heart. Melissa joined the choir at United Pentecostal Miracle Church (later renamed Beacon of Light Citadel of Praise) and later became a member of the Faith Center of Baltimore Praise Team. While at the Faith Center, she spearheaded catering for special events and assisted in additional catering events with sister friends; her gifted hands were rarely still! As if these were not enough, Melissa’s gifts included decorating for special occasions like birthdays, holidays and weddings. When she did find some time for herself, she thoroughly enjoyed shopping; shoes were at the top of her list! You could always find Melissa and Antoinette (Netty) together, referring to each other as “the Alto to my Soprano” or “the Soprano to my Alto”. On December 4, 2021 Melissa was elevated as an ordained Deacon of the Gospel of Jesus Christ under the leadership of Bishop Charles G. Ellis, III & Pastor Rosalind Green-Ellis at The Faith Center of Baltimore. We find strength, joy, and peace knowing that Melissa is no longer sick, in pain or suffering but is now fully healed in the presence of the Lord Jesus Christ. Her legacy of love for family, fun gatherings, grabbing the mic and singing or making everyone laugh and feel better, or simply “getting cute”, will live on through us. Melissa was preceded in death by her parents, Jesse Barnes, Jr. and Deborah Cottman, as well as her younger brother, Tayvon Barnes. She leaves to cherish her memory: her husband and love of her life, D’Angelo Battle; 3 sons, William Clinton III, D’Angelo, Jr. and Damari; 4 brothers, Dante, Julius, Jesse, and Kevin; 3 sisters, Latrice, Antoinette and Aisha; one very special aunt, Geraldine Boyce; and a host of other relatives, nieces, nephews and friends.

The family of Mrs. Melissa Linette Barnes-Battle, created this Life Tributes page to make it easy to share your memories.