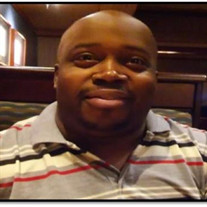 Maurice David Logan was born on April 23, 1974, to the late Betty Mae Jackson and Herbert Logan. God gave Maurice his wings suddenly on September 24, 2020. He is now resting with his heavenly family. Maurice, affectionately known as “Reece or Boss”, received his education at Barclay Elementary/ Middle School and Lake Clifton High School. After completion of high school, he started his career at Towson State University for over 13 years, than continued his work career at Johns Hopkins Hospital until his health prevented him from working. At a young age, Maurice gave his life to the Lord and Savior. He loved God and that love is what caused people to be drawn to him. Maurice was loved by everyone that he came in contact with. Maurice was a loving and dedicated husband, father, brother and friend. He loved and took care of his wife and four daughters like only a great man would. Maurice enjoyed cooking big Sunday dinners, grilling out, and having family over for the holidays. His favorite things to do were cutting grass, trimming his wife’s flowers, going on family vacations with his wife and daughters, eating crabs and watching his favorite football team, THE BALTIMORE RAVENS. All around, he had a big heart and loved to talk to people. He will be greatly missed. Maurice preceded in death two brothers, Curtis Logan and Rasheen Logan. He is survived by his wife of 28 years, Mary Meade-Logan, four daughters, Tanaya Logan, Tamia Logan, Tisha Logan and Taylor Logan, one brother, Anthony Logan, two sisters, Meshawn and Aleash, three sisters -in-law, Catrice, Veronica, and Sharonda, one brother-in-law, Troy and his mother-in-law, Mabel Meade, three aunts, Peggy, Ella, Joann, one uncle, Savannah Brown, four nieces, MaKenzie, Tori, Autumn, and Ryland, four nephews, Corey, Marquis, Cameron and Ameen and a host of other family and friends.

The family of Maurice David Logan created this Life Tributes page to make it easy to share your memories.