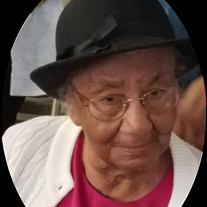 On Sunday, May 17, 2020, Mary E. Moore, passed away peacefully at age 101 after a brief illness. Born December 19, 1918 in Fairfield, North Carolina, daughter of the late Thomas C. Simpson (Tom) and Geneva Long Simpson (Eva). She was united in marriage to Theopher Moore (Tea) in 1973 in Baltimore, Maryland. Mary was the mother of two daughters and a host of grandchildren. She received her education from North Carolina Public School System and worked several jobs during her young life. Affectionally known as “Grandma and Mama Uba” she accepted Christ at a very young age attending Star Zion Church in Fairfield North Carolina. While living in Baltimore, Maryland she was a member and the Mother of Solid Rock Discipline Church of Christ for many years. She later moved back to Fairfield, North Carolina to take care of her mother for many years. In 2015, she moved back to Baltimore Maryland and later joined Second Shiloh Church of Christ where she was an active member until her transition. Mary worked as a domestic engineer for many years until her retirement.  On a warm summer day, you would find her fishing at Mattamuskeet Lake. She enjoyed listening to gospel music, eating sweet treats, and watching soap operas and family game shows. She was a master cook in the kitchen, preparing her favorite dishes to share with family, especially during the holidays. Mary treasured her family and always made people laugh. Mary is preceded in death by her husband Theopher Moore and one sister; Lucille Woods from Fairfield North Carolina. Left to cherish her fondest memories: Two daughters, Mary Johnson and Virginia Simpson; one son-law, Louis Johnson. Grandchildren; Audrey Simpson, Gloria Simpson, Deborah Simpson, Deatrice Harris, Steven Johnson, Dwayne Simpson and Thomas Johnson; Great-Grand Children (11), Great-Great grandchildren (16), Great-Great-Great grandchildren (5) and a host of nieces, nephews and friends.

The family of Mrs. Mary E. Moore, created this Life Tributes page to make it easy to share your memories.