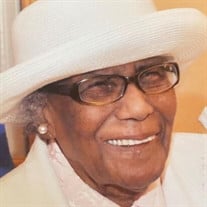 Mary Alice Fenwick was born on June 1st 1924 and was called home on May 6th, 2022. Mary was born the only child to Emma and John E. Waller of Orange Co. Virginia. Her father departed this life when she was very young, later her mother moved to Baltimore, MD, while Mary was raised by her grandparents in Virginia. Her grandparents both departed this life, Mary moved to Baltimore to live with her mother and new stepfather, Thomas H. Hicks, Sr. She was blessed with four brothers, Shirley, Richard, Thomas Jr, and Harold; all four preceded her in death. Mary was educated in Orange County Virginia and finished her education at Frederick Douglass High School in Baltimore City. Mary met her lifelong love retired from the army, Thomas J. Fenwick Sr., married and from that union was blessed with six children, Dotcenia Corley, Thomas Fenwick Jr., Mary A. Robinson, Donald Fenwick, Colleen Fenwick, and Shelia Jacks. Mary’s husband preceded her in death in 1985, as well as her son, Donald in 2017 and her daughter, Shelia in 2018. Mary was a domestic worker and worked in a warehouse packing seafood. She joined Macedonia Baptist Church and was baptized on April 4th 1956, by Dr. W.L Clayton and then later, her children were baptized. Her late husband was raised Catholic and was a member of St. Peter Claver Catholic Church until his passing. Mary raised her children in church to love Jesus, others, and themselves. She kept them active in the youth choir (Kaye Burke Chancell Choir), Sunday school, Sunday service, and vacation bible school. The three ministries she loved were the culinary ministry, Sunday School, and The Missions Ministry. Mary loved attending everyone’s birthday celebrations and visiting various churches and attending The United Baptist Missionary Convention, especially activities sponsored by The Women’s Auxiliary. She attended Macedonia Baptist Church until she became ill. She always attended bible study and church service while she was at Catonsville Commons and later Summit Park Health and Rehab Center, where she passed. She enjoyed the literature cards, and visits from her Macedonia family and various other friends. Mary leaves to mourn her children, Dotcenia, Thomas Jr., Mary, Colleen; one honorary daughter, Ruthie Wilder; one son-in-law, Jesse Corley; one daughter-in-law, Xenia Fenwick. She also had two other sons-in-law, Harold V. Robinson and Grady Jacks who preceded her in death. She also leaves 15 grandchildren, Devi, Vanessa, Kevin, Danielle, Shermere, Terrance, Tavon, Brittany, Mary, Gladys, Tangee, Tayron, Antoinette, Antoine, Dontae, and a host of great grands and great-great-grandchildren. Her best friend, Anna Adelle Hopewell, and some very good friends, Deaconess Martha Chandler and Irma Smith who all preceded her in death. Mary had a host of friends, family, and acquaintances, she will surely be missed by all.

Mary Alice Fenwick was born on June 1st 1924 and was called home on May 6th, 2022. Mary was born the only child to Emma and John E. Waller of Orange Co. Virginia. Her father departed this life when she was very young, later her mother moved... View Obituary & Service Information

The family of Mary A. Fenwick, created this Life Tributes page to make it easy to share your memories.

Mary Alice Fenwick was born on June 1st 1924 and was called home...