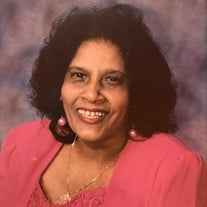 Mahadaye “Rama” Seepersad daughter of the late Ramdeen Samaroo and the late Ahvaria Choonisingh was born on August 3rd 1943 in Princes Town, Trinidad & Tobago. She peacefully transitioned from her earthly home to her heavenly home on Friday May 8th, 2020. Mahadaye also known as Mother Rama was educated in Trinidad Public School system. On July 17,1964 she married the late Jattan Seepersad from this union 3 sons were born. On November 25, 1985 she stepped out by faith and migrated to the USA. In search of a better life for both herself and her family, with God on her side she know he would carry her through the lonely days and years of being separated from her family whom she loved very much. As a result of her faith in God she endured many trials and was able to bring all her family to the United States of America. Mother Rama loved the lord and accepted him as her Lord and personal savior. In 1999 she joined New Hope Church of Deliverance under the leadership of Pastor Renay Kelley and Prophetess Maggie Kelley. Soon after she was baptized in Jesus name and later she served faithfully as both an usher and a church mother. Later she became a member of Power of Faith & Deliverance Ministries under the leadership of her son Pastor Ramlal Ralph Seepersad where she also served as an Usher as well as assisting the Lord’s house in any way possible. Not only did she love her church family members but she also loved her job as a housekeeper. She worked for the Schwartz family and their extended family for over 28 years, maintaining a great relationship with them until the end. Rama’s greatest hobby was gardening while her greatest talent was supporting everyone she met, she always found joy in helping others whether it was opening up her home to a loved one or assisting in her apartment’s community kitchen. Rama will always be remembered for the love, strength and loyalty she shared with everyone she met. She leaves to mourn her sons Roger, Ralph, and Ricky; Her daughter-in-law Alicia her grandchildren Eric, Aaron, Randi, Faith, Nicholas, Laura, Alex, Andrew and Adrian; her Sister Mona and her brother Motilal as well as a host of nieces, nephews, in-laws, relatives, many close friends and church family members. Proceeded by death her husband as well as three sisters and two brothers.

Mahadaye &#8220;Rama&#8221; Seepersad daughter of the late Ramdeen Samaroo and the late Ahvaria Choonisingh was born on August 3rd 1943 in Princes Town, Trinidad & Tobago. She peacefully transitioned from her earthly home to her heavenly... View Obituary & Service Information

The family of Mrs. Mahadaye Seepersad created this Life Tributes page to make it easy to share your memories.