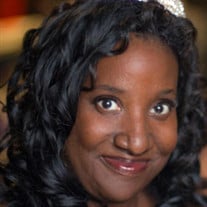 Lynn A. Pailin Henry was born in Baltimore, MD on May 20, 1973, to Larry and Lena Pailin. She was called to be with the creator on Sept 25, 2021. Lynn was educated in Baltimore City Public School System. She often joked that there were only two reasons she liked school, one was to sing as she was a member of her high school choir and the other to socialize. Lynn was known to be a “Social Butterfly”, she had a friendly spirit and would talk to any and everyone she met spreading joy and love. After high school Lynn worked briefly in the security field. If you asked, she would say being a mom was the best job she ever had. Her son was the love of her life, and she doted on him. As a single parent she proudly raised her only child Sean, ensuring he was raised right in her words. Just like Winnie the Pooh who Lynn was affectionately nicknamed after enjoyed getting friends together and so did Lynn. She loved being the life of the party and making people laugh. Pooh would share whatever she had to anyone one who asked if that meant giving a place to stay, a meal, money or just her time, there was nothing you could ask of her that she would not do or give for you if she could. Spending time with family and friends no matter what the activity was; playing cards, listening to music, sharing meals, celebrating holidays, or even cheering on the Baltimore Ravens were all considered creating cherished memories to Lynn. One of her fondest memories was the day she wed her soul mate Timothy Henry on Oct 3, 2015. Lynn’s desire to get closer to the creator led her to join Scripturally Sound Apostolic under the leadership of Walter Whitaker in 2015 and she stayed a faithful member until her passing. Lynn leaves to cherish her memory husband Elder Timothy Henry, son Sean Wheatley (Salena), granddaughter Lena Maria, Father Larry Pailin (Denise), Sisters Larrine Gresham, Lisa Studervant (Joseph), Brother Lamont Mumford, Brother-in-law Edward Henry Jr., Sister’s-in-law Vivian Brown, Vanessa and Corliss Henry, loyal lifelong friend Ivy Valentine and a host of nieces, nephews, aunts, uncles and other family members and friends. She was preceded in death by her mother Lena Jones.

Lynn A. Pailin Henry was born in Baltimore, MD on May 20, 1973, to Larry and Lena Pailin. She was called to be with the creator on Sept 25, 2021. Lynn was educated in Baltimore City Public School System. She often joked that there... View Obituary & Service Information

The family of Mrs. Lynn A. Pailin-Henry, created this Life Tributes page to make it easy to share your memories.