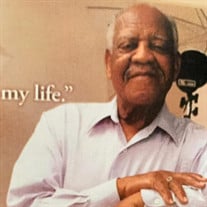 LOUIS ALBERT DAVIS, age 93, of Corrigan, Texas went home to be with his Lord and Savior Jesus Christ on Thursday, June 18, 2020. He transitioned peacefully in his home after a brief illness which culminated with weeks of in-home hospice care. Louis was born in Towson, Maryland on July 30, 1926. He was the second of 8 children born to Rev. George W. Davis and Amy E. Brown Davis. His brothers Thomas and George, and sisters Amy, Naomi and Vergesta preceded him in death. He grew up in Towson, Maryland where he completed his secondary education in Baltimore County public schools. Louis attended Morgan State College briefly. Louis enlisted in the U.S. Army during World War II, and served in the Asiatic-Pacific Campaign. He received an honorable discharge in 1946 as a Sergeant, and was awarded the Asiatic-Pacific Campaign Medal and World War II Victory Medal. Louis met the love of his life, Ms. Gertha Jefferson of Corrigan, Texas while she was teaching after graduating from Morgan State College. They married September 11, 1948 and remained married until his death. They celebrated their 50th anniversary with a gala reception in Baltimore, and their 70th anniversary at their home in Corrigan, Texas with a few family members. Louis was an industrious man who believed in providing for his home and serving others. He had a successful career as a postal worker, and was affectionately known as, “The Mailman” among his customers. He was a very pleasant and positive individual with his family, friends, church members and customers. Following his retirement from the U.S. Postal Service, Louis and Gertha moved to Gertha’s home town, Corrigan, Texas, in 1983 and established their new home. Louis became a “ranch hand” working the ranch with Gertha’s brothers until he “retired” from that strenuous work. Louis accepted Christ at an early age under the instruction from his father and mother, and he continued to be an active member in churches he attended. After the move to Corrigan, Louis united with the congregation of Memorial Chapel Christian Methodist Episcopal Church, Lufkin, Texas in 1988. He was a dedicated member who supported the church financially, and he served as a Steward and member of the Male Chorus. He continued as a volunteer janitor until his health failed at age 92. The church named their fellowship hall, “The Louis A. Davis Fellowship Hall” in his honor following his contribution to the installation of a new roof. Louis was very active in his retirement years. He made multiple driving trips from Texas to Maryland to participate in family functions. In addition to his church involvement, Louis served as a janitor for local schools for 10 years. He was a contributor to the “Corrigan Times“ newspaper, writing articles and submitting pictures of community and family events. He was a member of the Corrigan Community Association (CCA) Choir and the CCA Scholarship Fund Committee. Louis also found time to serve on the Duncan-Jefferson Family Reunion Planning Committee. He enjoyed his favorite pastimes of riding his motorcycle, horseback riding, and maintaining his stamp collection. Louis is survived by his wife of almost 72 years, Gertha Davis; one sister, Doretha Davis Carr; one brother, Willie Davis; one sister-in-law Delma Graves; one brother-in-law Leon Jefferson; one godson, Thomas Davis, Jr.; and a host of cousins, nephews and nieces. While they had no children, “Uncle Lou and Aunt Gert” were a positive influence in the lives of their nephews and nieces, as well as other young people in the church and community. To God be the glory for the life well-lived by our beloved relative and friend.

LOUIS ALBERT DAVIS, age 93, of Corrigan, Texas went home to be with his Lord and Savior Jesus Christ on Thursday, June 18, 2020. He transitioned peacefully in his home after a brief illness which culminated with weeks of in-home hospice care.... View Obituary & Service Information

The family of Louis Albert Davis created this Life Tributes page to make it easy to share your memories.