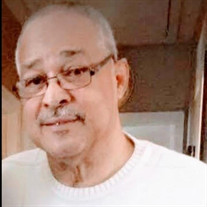 Obituary Forever Memories of Love, Family and Friendship. Lorenzo Louis Simpson was born to the late, Edward Eugene Simpson, Sr. and Ella Louise Simpson on August 25, 1944. Lorenzo transitioned from this life on March 19, 2021. Born, raised, and educated in Baltimore, MD., Lorenzo’s life spoke for itself, he lived life on his own terms, OF HIS OWN MERIT! He prided himself on being a master of many trades. Lorenzo worked sales for Crystal Clear Water Products, Logistics Liquor Distribution, Total Male Sales, CEO and business consultant and Timeshare sales (Las Vegas, NV). He also owned a night club and did promotion/management for Lorman House, 5 Mile House, and Maceo’s. Lorenzo’s mantra for life was to complain less and live larger. As he would often say, “drink water and walk slow.” This was symbolic of his gentle spirit. His debonair, charm, and loyalty went a long way in the Baltimore Community. Lorenzo had a unique passion for everything he was associated with. Lorenzo enjoyed family, traveling, and playing cards (Pinochle & Tonk). Lorenzo didn’t just like to gamble or play cards, he mastered getting ahead and if you were on his team, he would take you with him. His life was a victorious game of luxury. Lorenzo was a dedicated husband to the love of his life, Margo Simpson, who departed this life just shortly before him. Ma-Ma, in heaven your husband earned his wings. What a gift to witness him accept the Lord into his life. Lorenzo affectionately called the males in our family “Jim” as names of endearment, in turn we lovingly called him the same. “Jim” also went by many other nicknames given by those who loved him, such as, “Dad”, “Pop- Pop”, “Legs”, and “Big Renzo” to name a few. Lorenzo imparted wisdom and knowledge to everyone he loved; that is quite a legacy! His legacy teaches us to master the hand that life deals us by doing the right thing, the best that you can. In life he WON by doing just that! An extremely popular man, Lorenzo used his wit to draw out the best in people around him. Family and friends were important to him. To know Lorenzo was to love him! He loved us passionately, flaws and all. Lorenzo did what he could to keep peace and protect those he loved. He was preceded in death by; Eugene (Brother), Ella( Sister), Huggie (Son), Ray (Son), Stinka, Kim (Daughter) and in special remembrance, great grandbaby, Jibra’il. He leaves to mourn; brother Authur (Pee Wee); Children, Corey, Mustafa, Beverly (Kitty), Sherry (Ronald), Terry, Crystal, Erica (Raheem), Sean,(Monaee) Asia, and Hasim Rahman, Sr., Nicole, Lil Corey Andre (Pistol); Grandchildren, Lorenzo (Lil Lorenzo), Tony, Jamil, Shaunte’, Khalil, Lil Dana , Delontai, Kaila, Hasim Rahman, Jr. (Yimmah), (Lauren), Sharif, Amirah, Amaya, Amani, Squirt (Tyra), Lorenzo (Truck/Donte (Fatta), Sasha, Miyah, Rashaad, Javian, Aniyah, Heaven, Charlie, Braylyn, London, Warren, Kimora, Terea (TT), Tavon (Tata Man), Shawanda, Sean, Tyree, and Rayshawn; Daughters-in-law, Lisa and Shoshone; and a host of LOVING great grandchildren, nieces, nephews and other relatives. Peace to his dear friends, Mike, Clayton, Curtis & Tony, Dock, Will and Sahib. And many more too numerous to count!

The family of Mr. Lorenzo Louis Simpson, created this Life Tributes page to make it easy to share your memories.