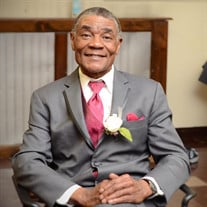 LEROY BRIDGES, JR. was born in Baltimore, Maryland on April 9, 1956. He was the only child between the late Shirley Esther Johnson Bridges and the late Leroy `Pete’ Bridges, Sr. On Sunday, November 29, 2020, while at North West Hospital, Lee affectionately known as “Bitsey”, transitioned to heaven to be with his Lord. Upon graduating from Walbrook High School, Lee was awarded the Centennial Scholarship and attended the University of Maryland, College Park. Lee persevered through racial unjust and profiling to earn his college degree with honors in 1979. Lee was a proud member of Iota Phi Theta Fraternity Inc. the Nu Chapter. One of the greatest highlights of Lee's life was when he and Angela Gordon-Holder welcomed their only child, Stacey Dionne Bridges Turner, into their lives. Stacey was Lee's world from day one; he made sure she would never want for anything. He marveled and bragged about her accomplishments from graduating with a degree in Chemistry from Morgan State University to receiving her Master of Science degree from Johns Hopkins University. Stacey was Lee's world, and his three grandkids: Jillian, Dillon, and Dawn were the center of his universe. You could not tell “Pop-Pop” he did not have the perfect grandkids. Endowed with a youthful and playful spirit, Lee enjoyed spending his weekends with the children. Lee worked in the pharmaceutical industry his entire career, employed and highly sought after by many companies within the industry. He spent many hours covering his territory on the East Coast in the Delmarva area. Lee enjoyed swimming, working out, playing basketball and tennis. He was a true Baltimore Orioles and Ravens fan. When the Ravens won, he would call his Aunt Mildred Johnson and play “WHO LET THE DOGS OUT” from a plush dog toy. Lee showed his love for family, friends, and neighbors by giving annual holiday pool and game parties. May 16, 2014 Lee married his soul mate and best friend, Arnita Bynum Bridges. Their loving relationship spanned nearly 30 years. Their wedding motto, “Better Late than Never” was displayed on a sign at their joyful wedding pool party at their home. Lee leaves to mourn and cherish his memory his wife: Arnita Bynum Bridges, his daughter: Stacey Dionne Bridges Turner (Don), grandchildren: Jillian, Dillon and Dawn and a whole host of family and friends. Lee will be greatly missed.

LEROY BRIDGES, JR. was born in Baltimore, Maryland on April 9, 1956. He was the only child between the late Shirley Esther Johnson Bridges and the late Leroy `Pete&#8217; Bridges, Sr. On Sunday, November 29, 2020, while at North West Hospital,... View Obituary & Service Information

The family of Mr. Leroy Bridges Jr. created this Life Tributes page to make it easy to share your memories.

LEROY BRIDGES, JR. was born in Baltimore, Maryland on April 9,...