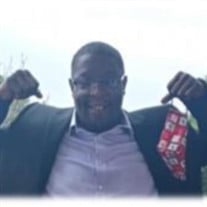 Lee Edward Wilkins Jr., fondly known as Ed or Big Ed, was born in Baltimore Maryland on January 04, 1981 to Deborah Townes and Lee Wilkins. Lee was the youngest of three siblings. Though he was the youngest, Lee always played a protective role in his family. He always said he took the blame so his older siblings wouldn’t get in trouble. Growing up they all shared and unbreakable bond. They were taught to always take care of each other, and that carried over into their adult years. As a child, Lee was said to be outgoing and playful. He loved going to the playground and playing with his wrestling men. Making friends always came easy to Lee because of his charisma. Lee was educated in the Baltimore City School System. Lee was funny, thoughtful, and caring, not just toward people, but also animals. Dogs were his favorite. He would always bring joy wherever he went. His favorite football team is the Baltimore Ravens. He was such a hardcore Ravens fan that if you weren’t a fan, he would argue with you because he just couldn’t understand how anyone could not support their hometown team. From the start of the opening season, Lee never missed a game, and he made sure he gave his family the experience of attending with him. Lee was later blessed with two beautiful children, Lee Edward Wilkins III and Baylee Noelle Wilkins. His greatest passion was his children and his family. He was a caring father, brother, uncle, and partner. Lee would always mention how he wanted to build a legacy and provide general wealth to take care of his family. His biggest saying was “I want to make memories because that’s something you’ll remember and cherish forever. Lee was a free soul, he enjoyed just being himself. He loved being comfortable at home, relaxing in pajamas, a sweatshirt, or a Ravens jersey with one shoe off and one sock on, he was just that kind of person, lovable, fun, and free! He never worried about material things. He just wanted to be happy, comfortable, and make memories. Just taking a little “me time” also brought him joy. Playing video games (Madden), watching his favorite cartoons (cartoon network was his favorite) while being cuddled with his dogs and making memories with his family and kids. Lee’s favorite holiday was Thanksgiving (he enjoyed cooking and eating). He enjoyed being with his family during the holidays. Lee was selfless and nothing meant more to him than his family. Lee will be remembered for his big smile, his countless jokes and harmless sense of humor. He had an unforgettable presence. Lee was the neighborhood big brother, uncle, and friend. He took care of everyone he knew. He may be gone, but he will never be forgotten. Lee had a huge heart, he was a fierce protector, and provider. He was full of life, light, and love. God opened his arms to welcome Lee home November 20, 2021, at the young age of 40. He was preceded in death by his mother and father. He will be truly missed by all who knew him. He was a wonderful dad, son, and brother. We are all thankful for the love and wisdom you showed and gave us. Thank you for the memories that we can forever cherish, and that will someday keep us laughing. We love you so much and we won’t ever forget you. Party in your Ravens pajamas, eat a nice hefty lunch meat sandwich with a ginger ale, and continue to watch over us. Lee Edward Wilkins Jr. leaves to mourn one son, Lee Wilkins; one daughter, Baylee “Dirty” Wilkins (Fatty); two sisters, Kimberly Townes, Tanika Roberson; two brothers, Dominic White, Eric Morrison; nieces, Jaberia “GG”, Janiya, Dominasia, Charlee; a bonus niece, Bria; nephews, Deontay, Liam, Gavin, Antonio “Shank”; a bonus daughter/niece, De’ahna “Buda” White; the mothers of his children, Britney Schleupner, Christina Moses; a loving partner, Sara Tussing; a close family friend, Robin Coschigano, Jermaine Haygood and a host of family and friends he held dear.

Lee Edward Wilkins Jr., fondly known as Ed or Big Ed, was born in Baltimore Maryland on January 04, 1981 to Deborah Townes and Lee Wilkins. Lee was the youngest of three siblings. Though he was the youngest, Lee always played a protective... View Obituary & Service Information

The family of Mr. Lee Edward Wilkins, Jr. created this Life Tributes page to make it easy to share your memories.