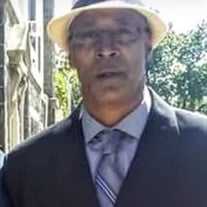 "Let not your heart be troubled: ye believe in God believe also in me. In my Father's house there are many mansions: if it were not so, I would have told you. I go to prepare a place for you. And if I go and prepare a place for you, I will come again and receive you into myself; that where I am there is any be also, And another I go ye know, and the way he knows. " John 14:1-4 Ledel Watson Grant, lovingly known as "Peanut". The son of the late Ledel Watson and Amy Carter, was born on December 30, 1961 and raised in Baltimore City. Ledel received his wings on December 15, 2020 at the age of 58 in University Hospital after a lengthy illness. Peanut received his education in the Baltimore City School System. In 1979, he enlisted in the U.S. Army Reserves. While in the military he served as a Sergeant with the 818th Infantry Unit as a Wrecker Operator. He received an honorable discharge in 1987. After his discharge, he gained employment as an Electrician at Bethlehem Steel and moved on to be a Maintenance Supervisor at Harbor Place. He also worked as a forklift operator at Southern Galvanizing and a Truck Driver for The Salvation Army. Peanut enjoyed being around his family and his friends from Philly. While in Philly he and some buddies made a Youtube video (SOUTH PHILLY HERE I COME), it was so entertaining. He was definitely the life of the party😁. He always talked about going on Family Feud saying we could win. We all can agree he was exceptionally good at cooking. It was funny how Peanut felt he could repair anything lol. He had a real strong bond with all of his children, grandchildren, and was excited about meeting his 1st great grandson (Kyson). One thing you could never doubt and that was his love for his kids,he would go above and beyond. He was preceded in death by his parents Ledel Watson and Amy Carter. His brothers Ronald and Rodney Grant and sister Geraldine Grant, great nephew Andrae and brother in law Milton Brown whom he was also close to and helped raise him. He leaves to cherish his memory three daughters Sharron Howard, Ebony Grant and Scarlette Maxwell, one son Cortez Grant, five grandkids Kevin, Shyann Ta'Kayla , Myessiah, and Nova, three sisters Barbara Brown, Jacqueline Lomax, and LaJoyce Watson. His special nieces and nephews Craig, Tonya , Dominic, Eric, Tony, Jermaine ,Andrae, Ronald, Donte and Howard (WeeWee). His last living aunt Emma Cottman, God-Sister Audrey Truitt and her daughter Michelle; two goddaughters Pamela and Dorthea; and two special friends Lolita and Octavia. He has a host of relatives and friends who will remember him always.

The family of Mr. Ledel Watson Grant, created this Life Tributes page to make it easy to share your memories.

&quot;Let not your heart be troubled: ye believe in God believe also...