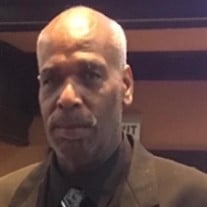 To every thing there is a season and a time to every purpose under heaven. A time to be born , A time to die , A time to plant and A time to pluck up which is planted. Ecclesiastes 3:4 Larry W. Johnson, son of the late Linwood R. Johnson and Sylvia M. Johnson was born on September 6, 1964 in Baltimore maryland. Larry was called home to be with the Lord of Savior after a brief illness on March 11, 2022. Sister April Johnson who preceded him in death. Larry was educated in Baltimore City School system At a young age Larry developed a love of gospel music while listening to his mother praising God through song. He also loved to hear his brother Mark sing praises to God. Larry continued to worship God in his own way as he sang and listened to gospel music daily. Larry grew up in Mt. Winans on peirpoint st. Many wonderful memories were created with Larry throughout the years. Larry also lived with his Aunt Madeline and Uncle Stanley in hanover md for 3 years where an unbreakable bond was formed. Larry loved his family and his Community. Larry's first job was working in Marty's, the neighborhood store with his mother. Larry worked for chimes as a floor technician in various locations from Social Service to BWI from 2006 until his illness. In 1992 Larry met the apple of his eye Daphne Hall. God blessed them with 2 boys. Together they raised 5 beautiful children with love and God's guidance. Larry talked about his children to everyone he encountered. He spent countless conversations talking about the love of his daughter Merrissa. All of Larry's children called him "The BEST DAD EVER ". Larry was famously known for his endless jokes. He was always messing with someone, making everyone laugh. A heart of Gold and a joyful smile God Blessed the world with Larry. He would do anything for anyone. He was a dedicated, Hardworking ,Great provider, devoted father and friend. Larry was loved by everyone. He always knew someone wherever he went. Larry was truly a Blessing to everyone he met. He was a loving, dedicated , kind, helpful christian man. Larry is the Best Father a child could ever ask for. Larry had a special bonded relationship with his brother's and sister. Larry has a special bond with his two nieces Wanica Robinson and Monique Johnson. A favorite cousin Torri Fields. Larry leaves to Cherish his memories A devoted Caregiver and friend Daphne Hall, Four Sons Andrew Johnson( Kendra ),Joshua Johnson( Paulette), Charles Comegys and Anthony Johnson, One daughter Merrissa Stevenson, Two grandsons Kia Johnson and Noah Johnson,Two brothers Linwood Johnson and Mark Johnson. one sister India Johnson. Host of Aunts, Uncles, Nieces, nephews, cousins, friends and family.

To every thing there is a season and a time to every purpose under heaven. A time to be born , A time to die , A time to plant and A time to pluck up which is planted. Ecclesiastes 3:4 Larry W. Johnson, son of the late Linwood R. Johnson and... View Obituary & Service Information

The family of Mr. Larry Warren Johnson created this Life Tributes page to make it easy to share your memories.

To every thing there is a season and a time to every purpose...