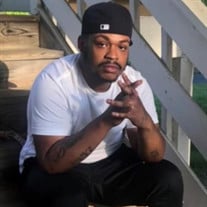 LaQuan Erik Lamb (Quan) was born to Tinika Nichol Ferguson and Lacy Edward Lamb II December 29th 1997. He parted this life on March 4th 2022. Quan was born in Columbus OH. After a few years, the family relocated back to Maryland where he attended Harford County public schools. Quan was incredibly good with his hands. At the sweet age of 8, he took the VCR apart and put it back together without help. That’s when we knew his hands were special. Later, Quan enrolled into a trade school in west Baltimore, where he specialized in auto mechanics which he loved and thoroughly enjoyed. Quan enjoyed many foods but would tell anyone in the world they could not compete with his auntie’s (Rocky) baked Mac and cheese. One of his biggest accomplishments was being the wonderful uncle he was to all of his nieces and nephews. He made sure that they each knew how much he loved and cherished them. He was referred to as “Uncle Dad” because although he was their uncle he was more like a father to them all. The bond between him and his first born niece NyAsia was like no other. They were more like brother and sister until her behavior needed to be corrected. He would talk for hours which led to so much laughter because of his goofiness and wonderful personality. Quan had such a love for music; especially music from local Baltimore rappers. You better believe that if he was leaving you a voice message it was going to be him rapping or singing. He also loved spades and believed he was a spades guru; he really thought he was untouchable. Quan was loved by everyone who was blessed to meet him. No matter where he went he made a friend. We will always remember how much he enjoyed annoying people like no other and his hearty laughter that followed it. He was an incredible young man who struggled with many demons while still bringing joy to so many. Quan may not have seemed perfect to some but he was perfect to us. His smile and laughter were contagious and he will truly be missed. He was proceeded in death by his older brother Lacy Edward Lamb III, niece NyAuna Rice and survived by his grandparents (Rosalind and Eddie Horton), mother (Tinika), father (Lacy), sisters Briauna Nichol Rice, LaChelle E’lise Lamb and brother Montel Larenzo Lamb (Squirt), Aunt Roxanne White and Uncle Aaron White (Paula White), nieces and nephews Nyasia, David, Amir, Kamari, Zaahir and a host of others. And we could never forget his “Sweetah,” Korin Montes, as he called her and bonus brothers David Whitfield and Travis Gore.

LaQuan Erik Lamb (Quan) was born to Tinika Nichol Ferguson and Lacy Edward Lamb II December 29th 1997. He parted this life on March 4th 2022. Quan was born in Columbus OH. After a few years, the family relocated back to Maryland where he attended... View Obituary & Service Information

The family of Mr. LaQuan Erik Lamb, created this Life Tributes page to make it easy to share your memories.