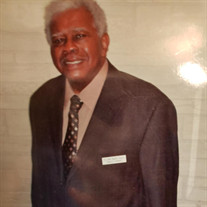 Celebrating the Blessed Life of L. J. Caldwell L.J. Caldwell was born to Sam and Bessie Johnson-Caldwell on January 1, 1935 in Cleveland County (Shelby) North Carolina. After a lengthy illness, God called him to eternal rest on July 30, 2020. L.J. was affectionately known by many in the community and friends as Uncle or Mr. Jay. In September 1958, L.J. met his helpmate and the love of his life, Rebecca Lea Wimbush. They married May 1, 1965 and enjoyed a loving relationship. Of this union they were blessed with the birth of their daughter, Rebecca Vernet Caldwell. At an early age, L.J. and his best friend Necoda Meeks started a gospel singing group known as The Extrordinary Jordanaires. He often spoke of how his mother would not let them leave to sing until she prayed for them. He would say ‘I thank God for my Momma.’ The Jordanaires spread the gospel through song all over the country. L. J. signature song was ‘I Got My Ticket’. L.J. loved the Lord and was willing to go where God sent him. In the 50’s he was called to Baltimore to help start a ministry. He did not know, nor see the big picture of what God had in store for him but he followed his heart. Once in Baltimore he was given the task along with other saints to start St. John Baptist Church, located on the corner of Pine and Franklin Street. The church moved several times and had several Pastors, but Deacon Caldwell remained faithful to the ministry. Deacon Caldwell along with Deacon A.Johnson, Deacon L.Hill had the responsibility of bringing in Pastors when St John was without leadership.. In 1978, L.J. was ordained as Deacon under the leadership of Rev. Stanley Bradford at New Elizabeth Baptist Church. Deacon Caldwell was chairman of the Deacon Board at St. John Baptist Church for over 40 years. He became superintendent of the Sunday school as well as Teacher. In all this, L.J. still found time to pick up several adults and children to bring them to church L.J. was also very active in the community. He was president of the Carroll Improvement Association. He took great joy in meeting with several city officials to promote change in the community. During his life L.J. had several jobs, but the one he was most proud of was with General Motors where he worked for 32 years. He would often brag that GM had the best automobiles on the planet. He would encourage everyone to purchase GM vehicles-including the Caldwell household.L. J. loved sports. As a youth, he was a member of the Baltimore Family Softball League. Who can forget the Grumman annual family picnics where Uncle Jay and his nephew Benjamin Richardson would win first place every year for horse- shoe pitching. He loved spending time with family whether it was a reunion or a family get-together. We so loved his personalized greeting ‘Hey, Hey, Hey my name is L.J….How are you today!!!!’, all in his Barry White voice. L. J. was preceded in death by his loving wife; Rebecca Caldwell. He leaves to cherish wonderful memories: His only daughter;Rebecca Vernet Caldwell, son; Kenneth Strong, grandchildren;Christopher, Kamari, Rashaad and his cool breeze Jerrone who took good care of his Pop-Pop, sister-in-laws; Alice Caldwell of North Carolina, Arnell Towler of Danville, Virginia, Ruby(Louis) Lee of Clinton, MD; brother-in-law; Earl Wimbush of Laurel, MD, trusted nephew; James Caldwell, god-daughter; Jalisa Bush, god-sons; Michael Boyd and Pastor William David Boyd who transitioned home to glory on the same day, devoted care giver; Roger Allen, special friend and confidant; Jackie King; dear friend; Deacon J. Frazier. A host of nieces, nephews, his St. John Baptist Church family, the New Elizabeth Church family, and a host of family and friends.

The family of Mr. L.J. Caldwell, created this Life Tributes page to make it easy to share your memories.