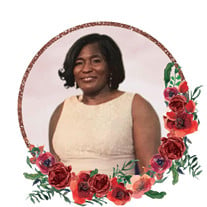 Kimberly Ann Grace, affectionately known as “Grace Face” or Kim for short, was born on February 11, 1967 in Baltimore, Maryland to Serina Tart and the late Floyd Grace Sr. Kim was educated in Baltimore City public schools and attended Paul Laurence Dunbar Senior High School before working as a nursing assistant and later a machine operator. Kim was beautiful inside and out! Truly selfless, she was always the first person to help anybody in need. She never held a single grudge because she was always smiling or cracking a joke. Kim was the life of the party and she loved to dance and listen to music, a pastime that she shared with her brother Avon. Her favorite musicians were Freddie Mercury, Minnie Riperton, Phyllis Hyman and The Isley Brothers. Kim could beat almost anybody in a game of tunk and she didn’t need to “cheat you to beat you,” as she would say! Kim was very much into politics. She watched CNN every day and she loved a good debate! She was spunky and stubborn, and she was never afraid to express her opinion! Kim was a vibrant soul with a beautiful smile. Kim was also an amazing mother and she was very proud of her three daughters. She cherished her grandchildren and loved to spoil them and spend time with them. She was extremely strong and resilient, and overcame many obstacles in life with such grace and determination. Kim was the kindest, most giving person that we know, and she leaves behind a beautiful legacy of which she was proud! Kim is preceded in death by her father Floyd Grace Sr. and her brother Avon Grace, with whom she shared a special bond and missed dearly throughout her life. While we are saddened by the loss of our beloved Kim, we are so happy that she and Avon are finally back together again. She is survived by her mother Serina Tart, three daughters: Tramaine Thaxton, Tierra Epps and Sierra Salters, one son-inlaw: Quenten Salters, four grandchildren: Jayla Salters, Cameren Salters, Divine Matthews and Demi Matthews, her lifelong partner and companion Johnny Epps, two brothers: Floyd Grace Jr. and Anthony Grace, three sisters: Diane Bell, Jackie Sample and Montess Grace, four nephews: Gregory, Donta, Kevin and Michael, six nieces: Felicia, Michelle, Chernae, Imoni, Toni and Tori, and a host of otherrelatives and friends.

The family of Ms. Kimberly Ann Grace created this Life Tributes page to make it easy to share your memories.