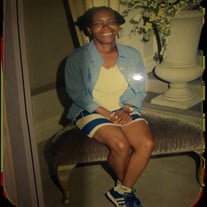 Kim Marie Lane was born on April 2, 1965 to the late Sheila Smith and Alphonso Henson. She suddenly departed this life on August 20, 2020. Kim was born and raised in Baltimore City and grew up and lived in the Sandtown community most of her life. Kim received her education from the Baltimore City School System. Kim was very intelligent and thrived in school. She won many spelling bees and was even honored by the mayor when she won the statewide spelling bee. Kim was a soft spoken and kindhearted person and was affectionately known as Lil Kim & Aunt Kim by many. She was very friendly and was a loyal friend to many throughout her life. She made friends everywhere she went. She did not have much but what she did have if she could use it to help someone else in need she would. Kim was a great writer and especially liked to write poetry. She spent many nights sitting up drinking her coffee and reading a book. Kim was a film buff. She loved watching movies and to this day has an extensive DVD collection. Kim thrived in grand mommy mode and was affectionately known as Ma Kim and Grandma Kim by her grandboys whom she loved to be around and care for. Until the day she left, Kim was a true Baltimorean and she loved her some MD steamed crabs and was regularly dragging her daughter to a crab spot so she could have a feast. Kim loved GOD and if you were truly a friend of Kim’s, you were sure to receive an inspirational text at least once a week if not every morning. To know her was to love her. She was proceeded in death by her Mother Sheila, Father Alphonso and Stepfather Clarence Sr., Grandmother Clara Obie, Grandfathers Lester & George. Kim leaves behind her three loving children Latasha, Deontae (Tayski), Sade(Baldy); four grandsons Carde III, Landen, Keontae and Deontae Jr.; two sisters Monica (Roland) and Shanna; one brother Rick; aunts Sandra, Joyce, Barbara, Annette, Phyllis, Sheila and Jocie (who proceeded her in death); uncles Stanley, Craig and Gerald ( who proceeded her in death); 3 nieces, 3 nephews, and a host of cousins, and friends.

Kim Marie Lane was born on April 2, 1965 to the late Sheila Smith and Alphonso Henson. She suddenly departed this life on August 20, 2020. Kim was born and raised in Baltimore City and grew up and lived in the Sandtown community most... View Obituary & Service Information

The family of Ms. Kim Marie Lane, created this Life Tributes page to make it easy to share your memories.